Red is associated with power, action, vitality, ambition, and passion. Discover more in this article. 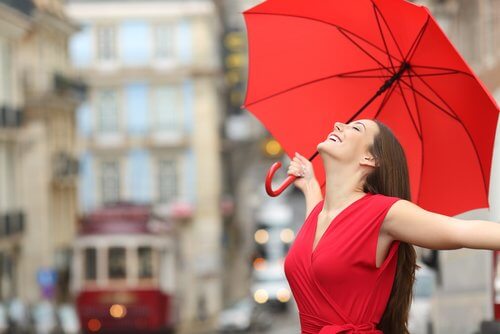 What would you say if we told you the color red made you more attractive? It would seem a bit hard to believe, right? However, many studies have shown that the color red awakens a visual interest in the people around us.

Day to day, men just as much as women try to present themselves in a pleasing and attractive way to the rest of society. This can open opportunities to interest in various situations.

And there are many different ways that we try to make ourselves look good. From basic things like a good diet and exercising, to choosing the right clothes, often limited or characterised by whatever happens to be the current fashion.

The way someone dresses says a lot about their personality, their interests, and intentions. The way we dress is a bit like a business card and is capable of dominating any first impressions. In other words, it’s like another form of language.

So, What Causes This Reaction?

The effect the color red has on attraction between people is not a learned behaviour, as you might have believed. It comes from something much more natural and instinctive, as demonstrated by a study at the University of Rochester, USA, in 2008.

According to the data they collected, the impact of the color red reveals part of our animal nature, since other species as well as humans exhibit the same behaviours. Female chimpanzees and baboons both attract males through the red colouration of their cheeks.

In the animal world, red is the symbol of ovulation and that there’s a chance of possible procreation. Despite not even entering the individual’s mind, it’s something that remains present in the person’s subconscious.

Not A Question of Gender

In his first study in 2008, psychologist Andrew Elliot, researcher at the University of Rochester, analysed the behaviour of men when presented with a selection of photographs of women with similar physical characteristics. However, some were framed in red and others in blue. This way he could quantify which color received the greatest attention.

The results revealed that although the women were similar physically the majority of men opted for those framed in red.

Having seen these results, the same researcher continued his study in 2010, but this time he focused on women participants. This was to find out if the same effect was produced in women. He showed them men in either blue or red t-shirts.

From this new research he concluded that women were more attracted to men in red t-shirts than those in blue, as he outlined in the Journal of Experimental Psychology.

Symbolism of the Color Red

Its strong attention-grabbing character makes red a color of emotions and high-intensity situations. This appears to be universally understood, which means that its potential for symbolism is almost limitless.

If you’re shy, we don’t recommend you use the color red to call more attention to yourself. You’ll probably end up making your discomfort and insecurity even worse.

With men there is a tendency to associate this color on women with sensuality. The use of red dresses and underwear awakens a sexual interest, so they’re often recommended to improve couples‘ libido.

Red is also associated with power and success. In fact, this particular association is more common in women observing men wearing red clothes.

In the end, despite the instinctive origin of these effects, it’s important to remember that this symbolism can very according to the situation. By managing these codes of communication, we can all become more sociable.