Recommendations for People on Anticoagulant Treatment

Anticoagulant therapy should be carefully reviewed by a physician every few months. This reduces the risk of bleeding. 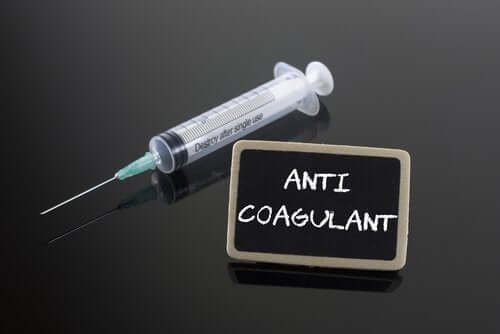 Anticoagulant treatment, as its name suggests, is used to prevent the blood from carrying out the clotting process. Thus, it prevents the formation of thrombi that can put a person’s health at risk.

This treatment includes different drugs that, by making the blood take longer to clot, reduce the incidence of thromboembolic disease. This pathology consists of a thrombus, which is a clot in the circulatory system, which, when circulating through the blood vessels, plugs a vein or artery, preventing the blood from reaching the tissues correctly.

Currently, many patients need anticoagulant treatment. In fact, specialists estimate that around 2% of the general population needs it; the vast majority of this percentage are people over 65 years of age.

However, this type of treatment needs to be closely monitored. There’s a high risk of side effects such as bleeding. Therefore, in this article we’ll explain some recommendations that people on anticoagulant therapy should take note of.

What is anticoagulant treatment used for?

Atrial fibrillation is a cardiac arrhythmia. In other words, it’s a disturbance in the normal rhythm of the heart. Unfortunately, it’s very common in some countries such as Spain, as it affects almost 9% of the Spanish population. Moreover, the number of people affected increases with age.

What happens is that atrial fibrillation increases the risk of clots forming inside the heart chambers. Thus, these clots tend to break off and advance through the blood, and can obstruct any vessel and cause an embolic accident.

On the other hand, doctors also use anticoagulant treatment in people who have been fitted with a cardiac prosthesis and in those who are at high risk of venous thromboembolism. Other indications for this treatment are:

You may like: All About Heparins and How They’re Administered

What recommendations go with anticoagulant treatment?

As we’ve already mentioned, specialists must properly control this treatment since slowing down blood coagulation means that there’s a greater risk of suffering hemorrhages. For this, the patient must have a blood test done at least every 4 weeks.

Doctors must prescribe the anticoagulant treatment and it must be permanently followed by a doctor or nurse. They’ll be able to establish the exact dosage. Ideally, the patient should take it every day at the same time and should never forget their treatment. If one day they forget to take the indicated dose, they should never take a double dose to compensate.

Likewise, every time they need to take a new medication, they must speak with their doctor. This is because this type of medication has a high risk of reacting with other drugs.

In addition, it’s very important to be aware that you shouldn’t stop taking this treatment without your doctor’s advice.

What other recommendations are appropriate?

It’s very important to avoid drinking alcohol and smoking when taking anticoagulant therapy. In addition, there are studies that state that you should watch your diet. These drugs interfere with vitamin K metabolism.

Vitamin K is a vitamin that enables the clotting process. It’s present in many foods such as spinach, animal liver or other vegetables. Therefore, we must control how much of these foods we consume. Doctors recommended limiting foods containing vitamin K to a maximum of two servings per day.

Another basic recommendation is to be alert to any type of bleeding. For example, if you observe blood in stools, in urine, or when coughing, you should visit your doctor, even if it’s before the scheduled appointment.

In the case of women of childbearing age, if they want to get pregnant, they should consult a doctor first. Anticoagulants can interfere with pregnancy. The same applies if you need surgery.

You may be interested in: How to Unclog Your Arteries with Four Natural Remedies

Patients who need anticoagulant treatment must correctly follow all the instructions of their doctor. It’s important to know that these are medications with many risks that cannot be taken lightly.

The Anticoagulant Properties of Garlic
For generations people have talked about the anticoagulant properties of garlic and its other health benefits. But how much of this is true? Read more »
Link copied!
Interesting Articles
Health
International Cochlear Implant Day: Everything You Need to Know