Rasagiline and its Use in Parkinson's Disease

The precise mechanisms of action of Rasagiline are currently unknown. Researchers believe its effects could have something to do with its MAO-B inhibitory activity, which would cause an increase in extracellular levels of dopamine. 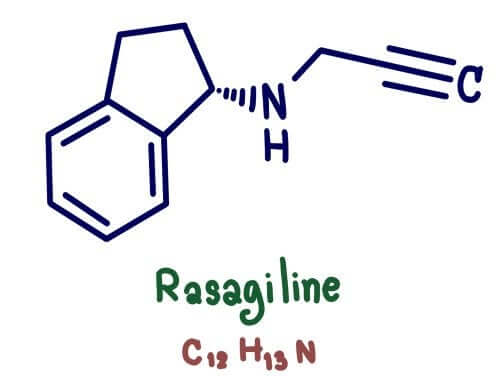 Rasagiline is a drug that belongs to the family of irreversible inhibitors of the monoamine oxidase inhibitors (MAOIs). People either use it by itself or as a combined therapy for the treatment of Parkinson’s. When the disease is already advanced, patients can use it in combination with other medications.

Rasagiline is selective of MAO type B versus type A. Due to this, it leads to an increase in the brain’s natural substances, such as monoamines.

Similarly, this medication comes in the form of tablets for oral intake. People undergoing treatment with it usually take it once a day, with or without food.

Rasagiline has better neuroprotective properties than other medications used for the same treatment, such as Selegiline. The reason for this is the latter metabolizes into a toxic substance and Rasagiline doesn’t.

Parkinson’s disease is a neurodegenerative disorder that affects the nervous system. It’s the second most prevalent disease, after Alzheimer’s disease, and belongs to the so-called Movement Disorders.

It’s a disease that’s characterized by the loss of neurons in the substantia nigra, a structure that’s found in the middle part of the brain. When the substantia nigra is lost, dopamine levels decrease considerably. Dopamine is a neurotransmitter necessary for the transmission of information from the brain to the rest of the body for everything that relates to movement.

This way, it affects the transmission by not having enough dopamine, which is one of the brain’s monoamines. And, it also affects the patient’s control over their movements. It all triggers a series of motor symptoms such as tremors while inactive, and overall stiffness.

Even though there are known factors that favor the development of this disorder, researchers still don’t know exactly what triggers it. Among the contributing factors, we can mention the following:

You may also be interested in reading: Movement Disorders: Meet Athetosis

Rasagiline and its impact on the body

As we mentioned above, Rasagiline is a drug that inhibits monoamine oxidase B (MAOB). This enzyme is part of the mitochondria in the nerve terminals of the entire body, especially in the brain, liver, and intestine mucosa.

MAOIs regulate the degradation of catecholamines, such as dopamine, and serotonin of the central nervous system and peripheral tissues. In the brain, the predominant MAOI is type B.

Researchers still debate the precise active mechanisms of this medication. They believe that its effects could have to do with its MAOB inhibitory activity and it would lead to an increase in extracellular levels of dopamine.

Rasagiline is a drug for treating Parkinson’s. It comes in the form of tablets for oral intake. Doctors usually recommend taking it at the same time, with or without food.

Always follow the doctor’s instructions and run any doubts you might have by them. Don’t change the dosage on your own. The misuse of this medication can lead to serious health consequences.

Auriculotherapy to Fight Parkinson’s Disease
Parkinson's disease is a degenerative disorder of the central nervous system (the brain and spinal cord). Auriculotherapy can help treat it. Read more »
Link copied!
Interesting Articles
Medication
Uses and Side Effects of Citalopram