Puerperal Infection: A Risk After Delivery

Puerperal infection is becoming less and less common after pregnancy, as preventive antibiotherapies are applied in cases of at-risk childbirth. Learn more about the condition in this article. 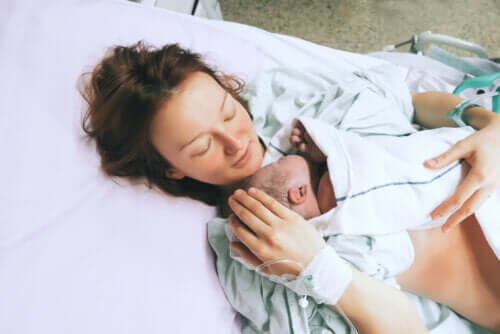 Puerperal infection (or maternal sepsis) is polymicrobial and occurs in the mother during the puerperium, that is, a few days after giving birth. The World Health Organization (WHO) estimates that, out of every 1,000 births, 11 women suffer infections that cause them to die or bring them close to death.

The reason for puerperal infection is that commensal bacterial colonies or symbionts from the vaginal tract infiltrate internal tissues and spread as a result of physiological stress during childbirth. If you want to know more about this serious medical condition, keep reading.

Puerperal infection was common years ago. However, thanks to the effective use of antibiotics and sanitization of the material during delivery, this condition is becoming increasingly rare in high-income countries. Some of the signs of it are as follows:

As indicated in the MSD Manual, all these clinical signs usually occur with intense fever (at 24-48 hours postpartum), headaches, and anorexia. In more severe cases, tachycardia, leukocytosis (increased white blood cells in the blood), and swelling of the pelvic walls may also occur.

Uncontrolled puerperal infection can cause microorganisms to colonize the blood and multiply in other organs. This is called bacteremia, which is a severe and life-threatening condition.

Septicemia is usually the immune response (equally uncontrolled) to the systemic infection. This leads to septic shock, which causes death in 40% of cases.

Infection occurs when bacteria from the vaginal tract take advantage of the opportunity to infiltrate the mother’s postpartum wounds. They tend to be polymicrobial, that is, with several species present. These include the following:

Bacteria can permeate surgical instruments during delivery and enter the deep tissues of the mother in the procedure. Alternatively, the causative agent may have entered the body normally (mouth-to-nose), but takes advantage of the weakened immune status to multiply.

A third option, the most common of all, is that bacteria present in the vaginal tract enter internal tissues through wounds that occur during childbirth.

As studies on the PubMed portal indicate, in high-income countries, there are only 0.1 to 0.6 cases of puerperal infection per 1000 births. Globally, the estimates are much higher, at 11 per 1000.

The probability of suffering this clinical picture also depends very much on the method of delivery. The statistics are as follows:

This doesn’t mean that an unscheduled cesarean section will cause a puerperal infection 1 in 4 times. By using broad-spectrum antibiotics, bacterial colony overgrowth is preventable, even before serious clinical signs appear.

Risk factors include the following:

In general, it’s a diagnosis by exclusion. After the first 24 hours after delivery, doctors should suspect puerperal infection when there’s no obvious cause for a fever of more than 38 °C in the mother lasting 2 days.

After ruling out other pathologies, doctors will perform blood and urine cultures to find out how far the bacteria have reached. At the same time, the analysis of cervical samples is rare, since doctors assume that they’ll be contaminated with microorganisms.

Treatment of puerperal infection is based on the intravenous injection of broad-spectrum antibiotics. These drugs are usually clindamycin plus gentamicin, with or without ampicillin. As indicated by scientific studies, the intravenous approach is recommended until the woman is without fever for 48 hours at a time.

In the case of tissue remnants in the uterus, a curettage is used to remove the debris from the uterus. This prevents the bacteria from proliferating again when the antibiotic treatment is complete.

Preventing or minimizing predisposing factors to infection is essential. According to the NSW Government Health portal, proper hygiene during this delicate period is essential for the mother’s wellbeing. Among the tips to follow are the following:

You may be interested in: 3 Reasons to Get A Pap Smear

Puerperal infection is a geographic problem

Nowadays, puerperal infection is an illness that’s rarely a cause for concern. If medical professionals perceive a risk of it happening, they proceed to preventive antibiotherapy, which reduces the probability by 75%.

Unfortunately, not all geographical areas can say the same. In countries with fewer public health structures, the mortality of new mothers increases drastically, as the lack of resources means that uncontrolled infection is much more frequent.

Toxic Shock Syndrome and Tampon Use
Toxic shock syndrome is caused by bacteria that usually grow in moist environments. It can have fatal consequences if not detected in time. Read more »
Link copied!
Interesting Articles
Illnesses
Swimmer's Itch: Causes, Symptoms and Treatment