Psoriasis and Coronary Heart Disease: How Are They Related?

The relationship between psoriasis and coronary heart disease was discovered relatively recently. Initially, some scientific studies suggested that there was a link, which was later confirmed. Find out more in this article. 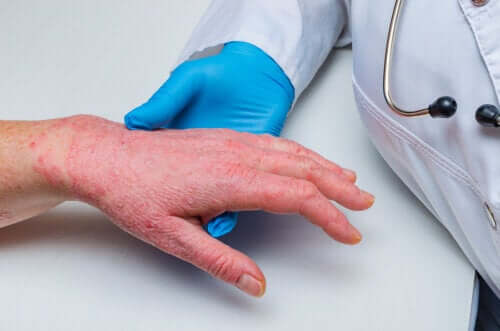 There’s a link between psoriasis and coronary heart disease. Although many people might not suspect this association, we now know that people with psoriasis are more likely to suffer heart problems than the rest of the population.

The explanation is that it’s due to inflammation. Although it’s a disease that primarily attacks the skin, psoriasis is itself an inflammatory process. In addition, this chronic inflammation is mediated by the immune system.

With chronic inflammation, the body lives in a state of stress. Stressed cells develop their metabolism in an environment that’s not entirely healthy, leading to long-term consequences. We know that prolonged states of inflammation are harmful, even when they don’t generate obvious symptoms.

This is why people with psoriasis develop strokes at an earlier age than other people. Similarly, they have an increased cardiovascular risk well before the age of fifty, the age at which the probability of coronary heart disease increases. Let’s learn more about this health issue.

Firstly, let’s have a look at what psoriasis is in order to understand how it’s linked to coronary heart disease. Psoriasis is a chronic inflammatory health issue that’s mainly located on the skin. It can also cause joint symptoms and problems in some internal organs, but to a lesser extent.

The skin inflammation of psoriasis causes accumulation of cells in the epidermis. These cells clump together to form plaques that itch, turn red, and lack moisture.

The classic symptoms of psoriasis are the following:

Although specialists don’t exactly know the cause of psoriasis, they know it’s an autoimmune disease. The defense cells of the human body don’t recognize the skin cells and attack them. This attack involves white blood cells and immune system substances such as antibodies.

The association between psoriasis and coronary heart disease isn’t part of the symptoms of the health issue. This means that not all patients with psoriasis are prone to a heart attack. It does, however, mean that there are a greater number of heart problems in psoriatic patients.

The data on the association between psoriasis and coronary heart disease

Several studies throughout the world have been able to demonstrate, with specific data, that the association between psoriasis and coronary heart disease exists. At first, researchers found suggestive links, but, over time, more and more evidence confirmed it.

So much so that, in cases of severe psoriasis, with very pronounced symptoms, cardiovascular mortality is up to 50% higher. This means that psoriatic patients are more likely to die from cardiac problems when compared to people without psoriasis.

Other studies evaluated people who have been suffering from health issues for ten years. At the end of that period they had recorded 28% more coronary heart disease in the follow-up group than in the general population.

This should also be understood, as mentioned above, in the context of inflammation. Any process that causes chronic inflammation in the body ends up affecting multiple organs and tissues. In addition to psoriasis, we can include rheumatoid arthritis and lupus erythematosus in this group of health issues which are also associated with increased cardiovascular death.

And we can’t overlook the statistics that show that psoriasis patients suffer greater stress and higher arterial hypertension than the rest. Both are cardiovascular risk factors.

Also read: 6 Types of Heart Disease and the Symptoms They Cause

The association between psoriasis and coronary disease

In psoriasis, there’s an increased risk of coronary heart disease because these patients have more plaques within their arteries. These plaques aren’t calcified nor are they related to the individual’s cholesterol levels. In addition, plaques appear earlier, when the psoriasis patient is still young.

This atherosclerosis in psoriatic patients significantly increases cardiac risk. Plaques in the arteries reduce blood flow to the tissues, including the heart muscle, and are at risk of rupturing. Plaque rupture is the etiology of acute myocardial infarction, for example.

If we add to the plaques the chronic inflammatory process, then the risk of rupture is imminent. Inflammatory substances can both stimulate plaque formation and cause plaque rupture in the final stretch.

If you suffer from psoriasis, the subject is a cause for concern, but not for despair. You have to control your symptoms through strict medical follow-up. Recent studies have also shown that once stability of inflammation is achieved, the possibility of coronary heart disease decreases.

Consult a professional if you have any doubts, and comply with the indicated therapy. Advances in science and discoveries about ways to control psoriasis have come a long way and quality of life has improved dramatically. So don’t worry, just go to your check-ups and follow doctor’s orders!

What Is Ischemic Heart Disease?
Coronary heart disease is known as ischemic heart disease. As its name indicates, the underlying process that causes the problem is ischemia. Read more »
Link copied!
Interesting Articles
Illnesses
Joan Massagué and the Origin of Cancer Metastasis