The Properties and Benefits of Chamomile Tea

Although it doesn't serve to cure illnesses, this infusion can help calm certain symptoms. Discover the properties and benefits of chamomile tea! 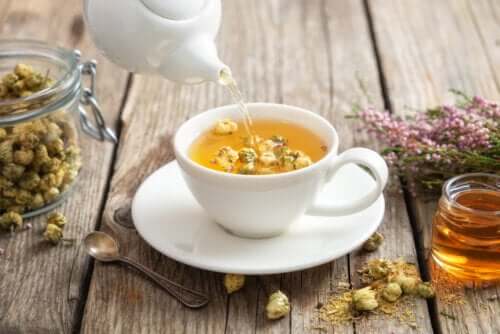 Chamomile tea is a natural infusion that became popular thanks to its interesting medicinal applications. While many of its uses come from popular literature, there’s now a wide variety of research supporting the properties and benefits of chamomile tea.

The plant is part of the Asteraceae family and there are numerous species. However, the most common when it comes to the preparation of tea are Matricaria chamomilla and Matricaria nobilis.

So, what are the main properties and the benefits of chamomile tea? Find out today!

We obtain chamomile tea by infusing the dried flowers of the plant with water. It’s characterized by a light floral aroma and a mild flavor that’s pleasant to the palate. Also, as we can see in an article published in Pharmacognosy Reviews, it concentrates bioactive compounds with therapeutic power.

Specifically, it contains substances such as:

This composition, which brings together about 120 chemical constituents, gives the plant various health properties. Thus, it’s said that the tea, the plant’s extracts, and also other presentations of chamomile have antimicrobial, anti-inflammatory, antioxidant, anxiolytic, and antispasmodic activity.

The uses of chamomile tea do not replace pharmacological medicine, but can help easing symptoms.

The main benefits of chamomile tea

In popular medicine, chamomile tea plays a leading role. Of course, today we know that it shouldn’t be the first-choice treatment against diseases. However, some use it as an aid to relieve the symptoms of certain ailments.

So, what can you use it for?

The phenolic compounds that chamomile tea contains have an antispasmodic effect that promotes the relief of menstrual pain. In a study published in the Iranian Journal of Obstetrics, Gynecology, and Infertility, women who consumed this tea for one month were able to reduce the severity of dysmenorrhea.

At the same time, as it’s a relaxing drink, participants also reported less anxiety associated with their period. Some hypotheses suggest that the plant decreases the production of prostaglandins, substances responsible for pain and inflammation. In either case, more research is necessary.

Read also: The Natural Remedy of Ginger for Menstrual Cramps

The digestive properties of chamomile tea are perhaps the most well-known. For hundreds of years, people have prepared this drink to soothe gastrointestinal discomforts such as flatulence, indigestion, diarrhea, nausea, and vomiting.

In this regard, there’s still a limited amount of evidence. However, a systematic review in Electronic Physician Journal details that these effects have to do with its antimicrobial, anti-inflammatory, and relaxing potential.

3. It promotes a better quality of sleep.

There’s no natural herb that can combat sleep disorders on its own. Despite this, some plants like chamomile serve as allies to sleep better. Due to its content of apigenin, a type of antioxidant, it stimulates the receptors in the brain and decreases insomnia.

4. It aids in blood glucose control.

Improving eating habits and lifestyle is critical to keeping blood glucose levels under control. However, in cases of occasional glucose increases, it’s advisable to drink beverages such as chamomile tea.

Studies suggest that extracts of the plant help stimulate the functions of the pancreas, the organ responsible for producing insulin. The latter is the hormone responsible for regulating sugar levels in the body. And although evidence is lacking, the findings are promising.

The antioxidants that chamomile tea contains (particularly, flavonoids) have a beneficial effect on heart health. Of course, this does not mean that it can replace medical treatment for heart conditions. Simply, when part of a regular diet, it helps reduce the risk of disease.

A small study published in the Journal of Endocrinological Investigation revealed benefits in diabetic patients who consumed chamomile tea with meals. These patients experienced improvements in their total cholesterol, triglyceride, and bad cholesterol levels.

What other benefits does chamomile tea provide?

The use of chamomile in tea and other presentations has spread throughout the world. Due to this, other benefits are attributed to the drink in addition to those we already mentioned. However, it’s important to note that many of these applications come from anecdotal data and lack scientific evidence:

Discover: Try this Amazing Tea with Tangerine Peel, Valerian Root, and Chamomile to Calm Your Nerves

Who should avoid drinking chamomile tea?

For most healthy adults, chamomile tea is safe to drink and carries no risk. To date, there are no reports of fatal or toxic adverse reactions from ingesting this beverage. However, it’s not recommended in the following cases:

What to remember about chamomile?

Chamomile, whether in tea or other forms, serves as a supplement to improve the symptoms of certain conditions. However, it should not replace medical treatment for any reason.

Those who wish to consume this plant in tea can safely drink 2 or 3 cups a day. Even so, if there are previous illnesses or if you are taking any medication, it is best to consult your doctor.

7 Medicinal Plants that May Help Improve Your Bone Health
Drinking certain teas on a regular basis is a great way to improve your bone health. Learn more about what you can do for healthy bones in this article! Read more »
Link copied!
Interesting Articles
Beauty
Can Cosmetics Irritate the Skin?