Bacteria-based supplements report various benefits in the gastrointestinal tract of adults, but is it healthy to give probiotics to infants and newborns? Here we give you the answer. 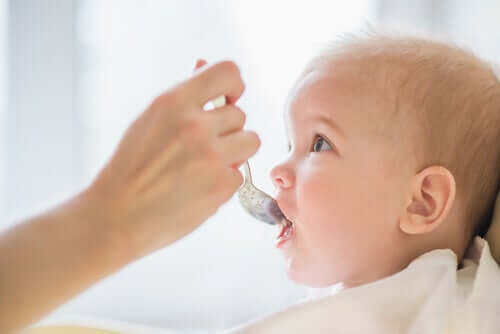 Is it appropriate to provide probiotics to very young babies? What are the risks of changing an infant’s intestinal flora? Before making any decisions related to pediatric health, it’s essential to clarify some uncertainties.

Probiotics are living microorganisms that we add to certain aspects of the diet and remain active in the intestine. Thanks to their activity, they modify the microbiota of the digestive system of those who consume them.

According to the World Health Organization (WHO), if we consume the right amount, they bring many health benefits. Among probiotic foods, there are fresh yogurts, kéfir, sauerkraut, and many more.

A balanced microbiota in the intestine is essential to human health. The cooperation between the person and the microorganisms that live in them determines both long and short term health.

According to several studies, the bacterial flora that lives in the gastrointestinal tract has several benefits. For example:

These are some benefits that gut bacteria bring to humans. It’s a symbiotic relationship as we wouldn’t exist without them, nor them without us.

To learn more: Good habits to boost your intestinal flora

Probiotic foods contain bacteria that are beneficial to the overall functioning of the intestinal microbiome. Some of these are Lactobacillus, Bifidobacterium, and Saccharomyces boulardii.

Healthy microbiota already contain these microorganisms, but increasing the amount of them can be good if the person consuming them doesn’t have existing illnesses. But is this different for newborns?

Studies that favor the use of probiotics for babies

An investigation carried out in 2014 showed the following results:

But that’s not all, as other studies like this also show the benefit of the Lactobacillus reuteri bacterium in the proper functioning of the intestine. In this case, a reduction of symptoms associated with colic was observed in infants with the application of probiotic drops in breast milk.

Risks of probiotics for babies

Probiotics are usually safe, but certain scientific sources warn that complications can arise from their use.

People with a compromised immune system, heart valve disease, or premature babies are possible risk groups. This is because the bacteria would have the tendency, in these situations, to multiply disproportionately, generating gastrointestinal inflammation, excessive activation of the immune system, and, in the worst case, bacteriemia.

We don’t fully know the extent of these illnesses in newborns. The effects of long-term use of these bacteria on child development are also difficult to ascertain, as this would mean several years of follow-up in babies who consumed them.

This may interest you: What’s the difference between prebiotics and probiotics?

Probiotics for babies: what to remember

Using probiotics on infants appears to have several benefits. Even so, scientific sources warn that we need to continue to study the interactions between these microorganisms and the intestinal health of the newborn. Potential risks and adverse effects should also be assessed.

That’s why it’s always best to seek advice from the pediatrician before carrying it out, because they know the medical history of the newborn better than anyone else, and will know what’s best. Not everyone should consume probiotics, but the amount of probiotics in the parent’s home should be assessed.

Probiotic Supplements: When to Take Them
Probiotic supplements help prevent diseases in healthy people and improve them in patients with certain conditions. Read on to learn more! Read more »
Link copied!
Interesting Articles
Babies
Description and Characteristics of Colostrum