Posttraumatic stress disorder can be very disabling. Consult a doctor if you recognize some of these symptoms in you or someone close to you. 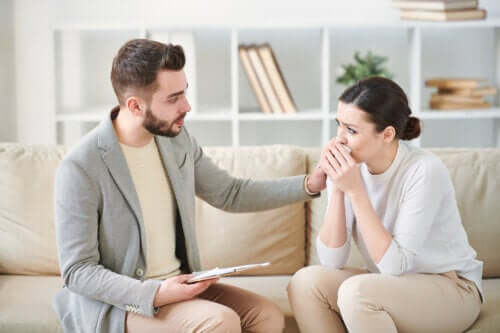 Posttraumatic stress disorder, also called PTSD, is a mental disorder that some people experience after exposure to a traumatic event – this may include natural disasters, wars, accidents, assault, kidnapping, abuse, etc.

Almost everyone develops some kind of reaction after experiencing a traumatic situation. Thus, a person is a lot more alert in the weeks after the event and also afraid and anxious about it. It’s an acute reaction to high stress. Fortunately, most people recover naturally after they process their trauma. However, some don’t manage it properly and continue to be anxious even after they’re safe.

What are the symptoms of posttraumatic stress disorder?

Each person reacts differently to a traumatic event, but there are many common symptoms. Therefore, the following signs must be present for at least a month and must produce significant discomfort to diagnose someone with PTSD:

Next, we’ll take a look at each of these symptoms in more detail.

Also, a person with PTSD may have the following dissociative symptoms:

Read also: Physical Pain and Anxiety, and Their Relationship

Why do some people experience PTSD and others don’t?

As we stated at the beginning, most people recover from a traumatic experience on their own. Thus, the reasons why some people develop posttraumatic stress disorder and others don’t vary. However, there are many predisposing factors.

Overall, these are the most significant:

As you can see, a combination of any of these factors will increase the intensity of posttraumatic stress in a person. Thus, it isn’t the same to experience one of the above symptoms as experiencing most of them.

As with most mental disorders, there’s a treatment for PTSD. In fact, there are different methods to improve the lives of a patient.

Cognitive-behavioral therapy is one of the most recent proven solutions for treating posttraumatic stress disorder. Overall, it’s always best to seek this treatment from a trained professional.

However, here’s a basic outline of some of the most common aspects of this type of treatment:

These types of groups can be very helpful to people with PTSD, especially if they’re in an environment where they lack support and understanding. Thus, it becomes easier to verbalize pain when people get together and share similar experiences. This is because it’s easier to put it in perspective and learn from other people who’ve been through similar experiences.

Next, this technique was developed in the 80s by neurologist Francine Shapiro. Overall, it’s been very helpful to millions of people with post-traumatic stress disorder.

Essentially, the method consists of causing a series of eye movements and auditory stimuli. What’s great about it is it helps reduce the effects of trauma by better processing the experience. Also, it helps to replace negative thoughts and feelings with more appropriate ones.

Finally, if necessary, SSRIs (serotonin reuptake inhibitor antidepressants) can decrease the intensity of posttraumatic stress disorder symptoms and relieve depression. However, you must remember that these must be prescribed by a professional and that you must follow a specific protocol when you stop using them.

Read also: Selective Mutism – What it Is and What Causes It

Finally, even though the symptoms of post-traumatic stress disorder are often difficult to manage, most people who attend therapy manage to overcome the trauma. Thus, they’ll eventually be able to remember what happened without feeling overwhelmed by fear and anguish.

Overall, the memory of a traumatic event will never go away and therapy won’t make a person forget it. However, it’ll allow them to let go of the past and integrate the traumatic memory as a learning experience.

Post Traumatic Stress and its Effects on Your Body
Today, we'll tell you about the impact of post-traumatic stress on your body. A stressed mind will always have significant effects at a physical health level. Read more »
Link copied!
Interesting Articles
Healthy mind
11 Strategies to Help You Be Smarter