Although neck lumps can be a symptom of thyroid cancer, you should bear in mind that not all lumps that form in this area are malignant. According to data from the AECC, only 1 in 20 lumps turns out to be malignant. 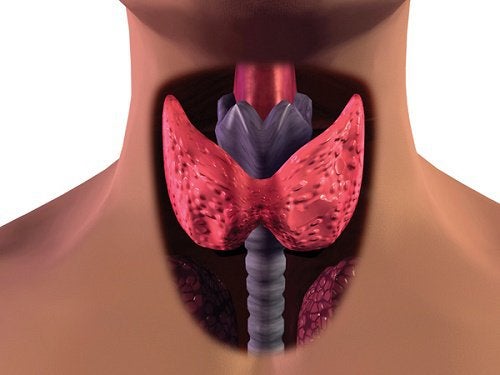 Thyroid cancer is a disease that doesn’t usually manifest signs or symptoms in its early stages. Therefore, it isn’t easy to detect until it begins to grow. Then, one of the first most noticeable symptoms are neck lumps that can be felt through the skin.

In addition, the sufferer may have throat and neck pain, difficulty swallowing and breathing, cough, hoarseness, and other bothersome symptoms we’ll talk about below.

The thyroid gland – The gland that regulates metabolism and other things

This gland doesn’t only regulate metabolism. Experts at the Spanish Association Against Cancer explain that:

“The function of follicular cells and the thyroid gland is to produce, store, and release thyroid hormones into the blood, also known as T3 (triiodothyronine) and T4 (thyroxine). They’re very similar to each other and their basic compound is thyroxine.”

These hormones are essential because they help control and perform various functions. Thus, when the body has adequate TSH, T3, and T4 levels, the organs can function properly, have energy, and fulfill various processes, even at the cognitive level.

The alteration when the thyroid shows increased activity is called hyperthyroidism. On the contrary, if the gland’s activity decreases, it’s known as hypothyroidism.

You might also enjoy: 3 Easy Ways to Cope with Hypothyroidism

When there’s an abnormal malignant cell growth in the thyroid, this gland stops working properly and the body loses its balance. This affects health.

Thyroid cancer is more common in women over 40. Nevertheless, it can also affect men.

The causes of the disease are still unknown. However, experts have determined certain risk factors:

Women are more at risk for thyroid cancer when they’re going through menopause or are post-menopausal.

According to the Spanish Association Against Cancer, the “telltale” symptoms that can indicate thyroid cancer are:

The treatment and prognosis vary depending on the type of thyroid cancer.

This is the most common type (70% of all cases) and women who have had a history of cervical irradiation are at a higher risk. The tumor is clearly defined and may have visible calcifications.

In patients in the advanced stages of this type of thyroid cancer, it may metastasize to the cervical nodes. Nodule growth is slow and painless.

This is the second most common type, which manifests in people who suffer from goiters and, particularly, those over 50 years old. The tumor may grow to be as large as the thyroid itself and is often difficult to detect.

It can spread through the blood and metastasize in the lungs and bones. It also spreads via the lymphatic system. The nodules are painless and hard to the touch.

This type of cancer manifests in patients over the age of 65 who have usually had prior problems with goiters or papillary and follicular carcinomas. This tumor appears as a lump that invades the entire gland and can metastasize through the lymphatic system. It’s painful, grows very quickly, and is hard to the touch.

Medullary carcinoma can metastasize early on through the lymphatic and circulatory systems. It’s common in women, especially those over 50. In some cases, this cancer can be hereditary. It’s easy to detect during a normal histological exam.

This cancer begins in cells known as lymphocytes, which are part of the body’s immune system. It grows very slowly and occurs more commonly in older women who have had other thyroid-related illnesses, such as Hashimoto’s disease.

They allow the doctor to observe the entire neck region (including the thyroid) for nodules or lumps. If they detect any, they’ll be able to determine whether they’re solid or filled with liquid. Also, cysts in the thyroid area aren’t necessarily cancerous. Most of the time, they’re benign.

A needle biopsy is performed by taking a small tissue sample from the nodule or cyst, which is then examined in a pathology lab. Your doctor may use an ultrasound to guide the needle and you’ll be given pain medication to numb the area. This test is performed only if a nodule has been detected.

Discover: Everything You Need to Know about a Lump in the Neck

his test not only examines your neck area. It also examines the chest region in search of signs of cancer elsewhere in the body, particularly the lungs. Thus, it determines whether the cancer has spread to any other soft tissues.

5 Thyroid Treatments You Can Do at Home
You can follow some tips and use natural remedies to make sure your thyroid works as it should. However, you should always talk to your doctor first to prevent any complications. Read more »
Link copied!
Interesting Articles
Illnesses
Do You Know about the Genetic Basis of Cancer?