Symptoms of ovarian cancer can be scary; it has the highest mortality rate after all. However, early detection can increase life expectancy by up to 95%. 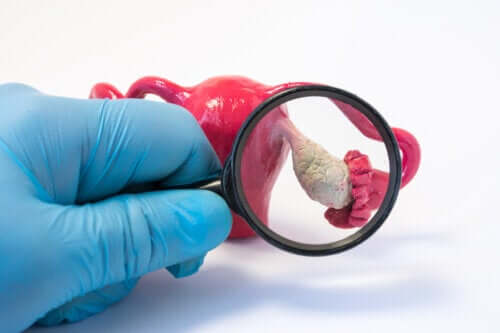 The symptoms of ovarian cancer aren’t always evident and this is why people often refer to it as a “silent killer.” This is because, like many other types of cancer, patients are asymptomatic until the disease is quite advanced and it’s too late to reverse it. Thus, you might want to be aware of some of its characteristics.

This type of cancer is the second most common gynecological type among women. However, it’s the one with the highest mortality rate since. Doctors seldom diagnose it on time, according to experts from the American Cancer Society.

According to reports in recent years, only 50% of women diagnosed with ovarian cancer manage to survive up to 5 years after the initial diagnosis. This is because in many cases doctors detect it at a rather advanced stage. Experts indicate that early detection of this disease increases life expectancy by up to 95%.

Ovarian cancer can afflict women at various ages but the risk increases from the age of 50 onwards. In fact, 65-year-old women are the most vulnerable.

Read Seven Signs of Bladder Cancer to Watch Out For


It’s important to inform yourself about the symptoms that could alert you to possible ovarian cancer or other health problems. Keep in mind that this information can help you determine when to consult a doctor.

The following symptoms are common in ovarian cancer, although they could also be signs of other health problems. Still, taking them into account and being able to identify them can be key to detecting this disease early.

Other symptoms to watch out for

More on the subject How is Ovarian Cancer Detected?

Don’t hesitate to consult your doctor if you experience any of the symptoms mentioned above. It’s always best to see them when you have any concerns about your health. This is because your physician should evaluate you to find out for sure if it could be ovarian cancer. Under no circumstances should you ignore the symptoms mentioned above. Especially if they’re keeping you from enjoying your life and progressively worsen.

In order to diagnose you, the doctor may order tests such as ultrasound, axial tomography (CT), magnetic resonance imaging, or a blood test called CA-125.

The Side Effects of Ovarian Cancer
Ovarian cancer is caused by the uncontrolled growth of cells in the ovaries. This type of cancer can involve the formation of tumors in the area and can also spread to other parts of the body. Read more »
Link copied!
Interesting Articles
Illnesses
Characteristics of Henoch-Schönlein Purpura Disorder