Polycystic Ovarian Syndrome: How to Treat it 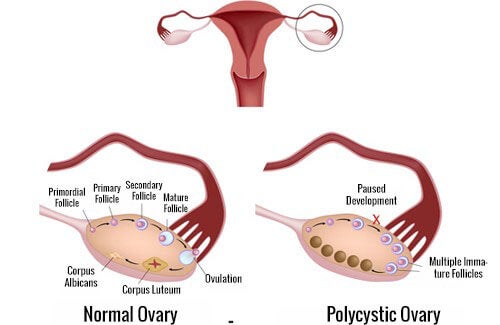 As we all know, the ovaries are part of the female sex organs. They have a principal function in producing sex hormones and eggs.

In general, they are a pair of an oval-shaped structure. They are very similar to the shape of an almond with a grayish color. They’re attached to both sides of the uterus and the pelvic wall. They are also very small and don’t weigh much.

Due to their characteristics, you could say that the ovaries do the same thing as the male testicles. Today, we’re going to provide clear answers to these two questions. What is polycystic ovarian syndrome and how is it treated?

What is polycystic ovarian syndrome?

Polycystic ovarian syndrome is a syndrome or symptom that specifically consists of a disruption in the sex hormones. Among other things, this illness causes pregnancy problems, ovarian cysts, menstrual cycle changes, and, in general, some other specific problems.

It’s also known as the Stein-Leventhal Syndrome. It’s considered to be one of the main illnesses among women during their reproductive stage. Although its causes and symptoms are different and complicated, the majority of the time it is associated with genetics.

As mentioned before, polycystic ovarian syndrome causes changes in the production of certain hormones, mainly estrogen and progesterone, which are in charge of helping the ovaries release eggs. Also, this syndrome affects androgen as well. As its name indicates, is a masculine hormone that is also found in women.

Therefore, Stein-Leventhal Syndrome makes it very difficult for a woman’s ovaries to release mature or completely developed eggs. Therefore, the latter doesn’t detach from the ovary, which can cause small cysts to form.

In this sense, a cyst is a type of bulge or bag that has its own tissue. The majority of the time it has semisolid or fluid material or just air. It’s very common for Polycystic Ovarian Syndrome to appear in young women from 20 to 30 years old, although in some cases, adolescents that are starting their first menstrual cycle can suffer from it.

However, that is very rare. As mentioned earlier, women with polycystic ovarian syndrome usually have a relative that had it or at least suffered from the same symptoms.

Some of the most common symptoms are oligomenorrhea and amenorrhea. That means missing or having irregular menstrual cycles, as well as the amount of fluid that ranges from very little to a lot, depending on the case.

Also, infertility problems that are mainly due to the lack of ovulation and metabolic disorders that cause obesity and changes in the way insulin is processed. If it’s small, you shouldn’t forget that polycystic ovarian syndrome can cause serious hormonal changes.

Due to mostly to androgen, like an increase in hair on the chest and face, reduction in breast size, deepening of the voice, hair loss or baldness, enlargement of the clitoris, excessive build-up appearing in the form of acne and accumulation or fat creases in areas like the groin, neck, armpits, and breasts.

Check out this article too:

How is it detected?

To detect this illness, you must run some tests and an analysis of the patient’s medical history. These tests usually consist of a physical exam, especially of the pelvis, which is meant to detect inflammation in the ovaries or the clitoris. Also, they calculate the body mass index (BMI), and the weight and size of the abdomen of the person.

Obviously, the other very important exams that help stipulate if the patient suffers from PCOS are blood tests. That way hormone levels of estrogen, testosterone, as well as glucose, lipids, prolactin, and thyroid, can be checked through those blood tests.

Also, doctors can suggest an ultrasound of the vagina or a pelvic laparoscopy. Don’t forget that the patient’s medical history must be taken into consideration. Especially, if they suffer from diabetes, high blood pressure, obesity, or high cholesterol.

After having undergone the necessary tests, if polycystic ovarian syndrome is detected, treatment must be started. First and foremost, a very important aspect is to reduce — if necessary — the patient’s body weight, mainly because in this way other diseases like diabetes, high blood pressure, and high cholesterol can be treated better.

Also, due to there being a big possibility for the patient to get pregnant. Doctors tend to prescribe oral medicine as well, especially contraceptive pills. The production of androgen is regulated with them, causing menstrual cycles to be more regular, which prevents physical changes, infertility, and acne problems.

Nonetheless, there are also other options for the aforementioned like diabetes medicine, hormones, clomiphene citrate, spironolactone or flutamide pills, or eflornithine cream.

Surgery is also an excellent option to treat infertility. It’s very important to remember that patients with PSOC should constantly try to maintain a proper diet. Also, it’s extremely dangerous to undergo treatment like this if a good diagnosis has not been done because the hormones tend to be very delicate and can only be administered by a qualified specialist.

It’s important to clarify that this illness is easy to treat and solve if you undergo the correct treatment. In many cases, the final result is the patient getting pregnant, although at the risk of having high blood pressure and diabetes during gestation.

Also, people that suffer from PSOC have more chances of suffering from endometrial or breast cancer, as well as sterility. Obviously, if any of these aforementioned symptoms are noticeable, you should see a specialized doctor to determine if you have polycystic ovarian syndrome. Women in their reproductive stage are the most susceptible and thus they should be the most concerned.

As with any other type of illness, PSOC can have very influential effects on the patient. Just as mentioned before, women can suffer from infertility or serious problems in getting pregnant.

As we all know, conception is one of the biggest dreams of couples around the world. Therefore, it would be a good idea to take proper precautions so that, if necessary, you can start treatment as soon as possible.

Women that suffer from this syndrome shouldn’t worry. They should have faith and be motivated, thanks to the huge advances in current medicine that make things easier.