As for the duration of pharmacological treatment of ear infections, it's important to take into account the age of the child, the previous history of recurrent otitis media, and the existence or not of previous failure. 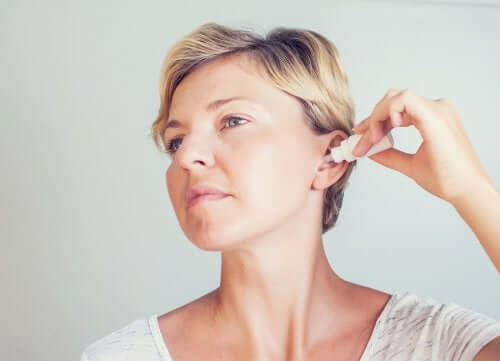 How much do you know about the pharmacological treatment of ear infections?

An ear infection, or otitis media, is the presence of exudate, an oozy substance, in the middle ear cavity. This can be serous, mucous, purulent, or mixed.

Depending on the duration of this liquid in the ear, together with the presence or not of acute symptoms, doctors classify ear infections into one of the clinical forms of otitis media: Acute, subacute or chronic.

Although we’ve mentioned otitis media, in particular, there are also more types of infections. For example, there are external ear infections, which we also know as swimmer’s ear.

Let’s look at the main characteristics of each one as well as the pharmacological treatment of ear infections.

Acute otitis media is an illness that’s common among infants and young children. According to estimates, by the age of 5, more than 90% of children have suffered from some form of otitis media and 30% suffer from recurrent otitis media.

As we’ve seen, they can be acute, subacute, or chronic. It’s caused by a microorganism and occurs when fluid is produced in the middle ear that can’t be drained properly through the Eustachian tube.

Therefore, this fluid accumulates causing an infection. As a consequence, ear infections can affect hearing, since sound has difficulty passing through all the fluid.

We can divide the causes or epidemiological factors into two large groups:

The most frequent pathogens that trigger this infection are:

As for the main symptoms, we can mention ear pain, fever, and suppuration.

Treatment can be symptomatic and pharmacological. Focusing on the latter, it’s important to take into account that middle ear infections cure spontaneously cure between about 80-90% of the time, which should be considered in the assessment of treatment.

Although different antibiotics can be used to fight this condition, the resistance that bacteria are developing to beta-lactams and macrolides limits the use of amoxicillin at high doses.

As for the duration of treatment, doctors should consider the child’s age, previous history of recurrent middle ear infections, and whether or not previous treatments worked.

Swimmer’s ear, also known as otitis externa, is an infection of the ear canal that carries sound from the outside of the body to the eardrum. Just as in the case of otitis media, the cause is mainly a bacterial infection.

Under normal conditions, earwax in the ear canal is a protective barrier of an oily nature. This substance has a slightly acidic pH and contains several enzymes with antibacterial and antifungal activity.

Therefore, when the protective mechanisms of the canal are broken, an alteration in the protective lipid layer of the earwax occurs. The duct finally becomes alkaline, favoring the proliferation of pathogenic microorganisms.

The most common cause for altering these protective mechanisms is excess moisture in the ear canal. It usually occurs due to:

Other predisposing causes are excessive cleaning of the duct with inappropriate elements such as swabs, and changes in the pH of the skin from washing with soap and water or using alkaline drops.

That being said, the great majority of cases will be solved with antibiotic ear drops with coverage for Staphylococcus aureus and Pseudomona aeruginosa. There’s a diversity of possibilities based on aminoglycosides or quinolones that can be associated with anesthetics, corticoids, and acidifying solutions.

Topical therapy should be administered three drops at a time, two or three times a day, according to the composition and the indications of the physician. As for the duration of treatment, it should last for 7 or 10 days.

What’s more, during the entire treatment period, the patient should avoid wetting the ear.

Discover: 9 Dangerous Bacteria that Are Harmful to Humans

The pharmacological treatment of both middle and external ear infection is usually done with antibiotics. However, as we’ve mentioned, many of them have already lost effectiveness against this type of infection.

This is due to the misuse of these drugs, which favors the appearance of resistance by the microorganisms. Therefore, you should never self-medicate and always follow the doctor’s recommendations and treatment guidelines.

How to Prevent Ear Infections in the Summer
The combination of water activities and high temperatures often result in more cases of ear infections in the summer; proper hygiene helps. Read more »
Link copied!
Interesting Articles
Treatments
What Are the Risks of Knee Surgery?