Phantom Pregnancy: What Is It?

Some people are diagnosed with a phantom pregnancy. Today we'll see what it really is and how it can be treated. 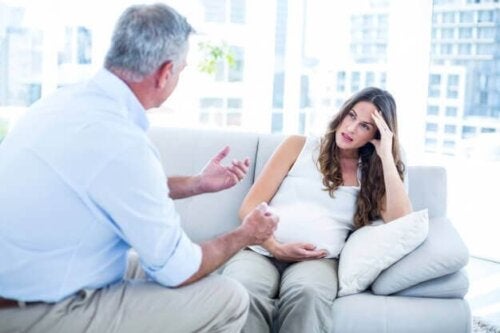 Many people have heard of the concept of a phantom pregnancy. However, you might see it as something distant. A concept that you’ve seen in some movies or documentaries.

Maybe you’ve heard the term phantom pregnancy because an animal in your home has suffered it. This usually happens to dogs. However, people can also suffer from this type of pregnancy, which is also known as pseudocyesis.

Throughout this article we’ll tell you about its characteristics and the most appropriate treatment options.

Characteristics of a phantom pregnancy

Currently, cases of false or phantom pregnancies are quite rare, at least in our society. The reason for this is found, as some studies indicate, in the social significance of pregnancy.

Not too long ago, women needed to have children to feel that they had fulfilled their mission. Being biologically predisposed to pregnancy, the impossibility of conceiving and the stress that this entailed, made women susceptible to pseudocyesis.

Currently, it isn’t as important to society for women to have children. Now there are other interests and being a mother is an option that many women don’t choose. However, they shouldn’t feel bad about it.

Nevertheless, we’re going to take a look at the characteristics that allow you to detect a phantom pregnancy:

Despite the fact that all these symptoms could clearly indicate that there’s a pregnancy, in the case of pseudocyesis, there is no baby.

A real case of pseudocyesis

Dr. Ana Cecilia Márquez wrote about a case of a real phantom pregnancy. In it, she explained how a 34-year-old patient came to her office with a 28-week pregnancy. At least, that was what she claimed.

The reason for the consultation was because the baby wasn’t moving. Her pregnancy had been diagnosed due to the symptoms she presented. These were:

After corroborating these symptoms, a study was carried out on the patient, which showed that there was no heartbeat. To check, they did an ultrasound, but the images didn’t give any indication that the woman was pregnant.

As we’ve been able to show, a phantom pregnancy causes some real symptoms that don’t correspond to the physical state of the woman who suffers them. It’s not an easy situation, so the treatment usually focuses on the psychological aspect.

This type of care is essential when doctors diagnose a phantom pregnancy. Many times women suffer it as a way of escaping from some emotion that they aren’t able to manage.

Additionally, wanting to be a mother and being unable to make it happen (whether due to problems with your partner or infertility), can cause stress and anxiety that leads to pseudocyesis.

You can discuss all of this with a psychologist. Normally, the woman initially rejects the possibility of not being pregnant. However, as soon as she accepts what’s happening to her, this type of pregnancy often disappears on its own.

You may be interested in: Four Keys to Overcome Difficult Times

Although seeing a psychologist is important, you might also need a psychiatrist. In fact, these two professionals usually work together in certain situations in order to achieve better results.

In addition, in the case of a phantom pregnancy, you may need ovulation-inducing drugs, the absence of which is causing amenorrhea. Therefore, the return of menstruation can make the patient aware that her pregnancy was only in her imagination.

Has anyone close to you ever suffered a phantom pregnancy? Has any pet of yours experienced it? We hope this article has helped you better understand this situation that some women go through.

We can’t emphasize enough the importance of putting yourself in the hands of psychological health professionals, since with their help not only can you resolve this situation, but also improve your overall well-being.

What You Should Eat During Pregnancy
Pregnancy is a special time in which the body needs a much larger number of nutrients. So, eating fruits and vegetables or eating lean meat will help both the mother's and the fetus's development. Read more »
Link copied!
Interesting Articles
Beauty
Spot Corrector Creams: Everything You Need to Know