Pemphigus vulgaris is an autoimmune disease that attacks the skin and mucous membranes of the human body. It's rare, but can be life-threatening for those who suffer from it and don't receive treatment. Here we'll tell you everything you need to know about this disease. 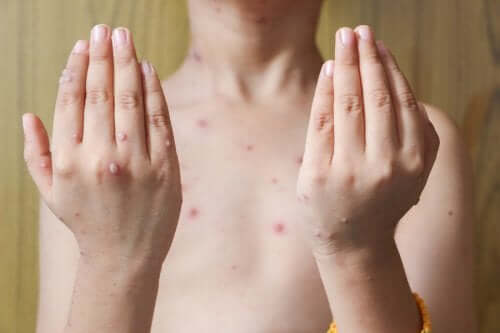 Pemphigus vulgaris has always been of interest to medicine because of its rarity. Its treatment is long-term and, while today it’s possible to detect it in time, it can still even cause death.

As a rare skin disease, its distribution in the world is also variable. According to epidemiological studies, there are countries like Israel where five people out of every hundred thousand suffer from it each year. At the same time, in England, there’s only one affected person per hundred thousand inhabitants per year.

In persons of pediatric age, the risk of pemphigus vulgaris is minimal. The majority of cases appear in elderly people, and has a tendency to become chronic. When it comes to men and women, the prevalence is the same for both throughout the world.

As we mentioned, it’s an autoimmune disease, meaning that the body’s own antibodies attack structures that they don’t recognize. As such, it’s not contagious. Those who suffer from this condition can’t transmit it to others through contact or proximity.

The skin blisters that pemphigus vulgaris produces aren’t deadly in and of themselves. However, they do cause certain complications that can eventually lead to death when treatment is lacking. Among the most frequent complications we can name are the following:

Pemphigus vulgaris is an autoimmune disease in which the body’s antibodies attack skin proteins. These antibodies destroy the substances that hold skin cells together. And, as the cells separate under attack, the characteristic blisters of the disease form.

A similar situation occurs in another related disease, bullous pemphigoid. In this case, antibodies attack the proteins that join the superficial layer of the skin -epidermis- with the intermediate layer -dermis-, thereby separating them.

In pemphigus vulgaris, on the other hand, the cells that separate are those that are in the same layer–the epidermis, the superficial layer. As they separate and leave a greater space between each other, liquids accumulate and form blisters.

Worldwide studies show that there’s the possibility of a genetic component in the disease. Since the pathology is more frequent among certain ethnic groups, such as Ashkenazi Jews for example, experts assume that hereditary factors play a role.

More rarely, researchers have detected drugs whose administration could cause the adverse effect of pemphigus vulgaris. Among them we can mention:

Keep learning: The Truth about Skincare and its Health

The symptoms of pemphigus vulgaris are blisters on the skin and the mucous membranes of the body. In some cases there may be sloughing or peeling of the skin by rubbing or friction.

The blisters can easily break, creating the danger of infection. When they burst, the blisters secrete their contents to the outside and leave the skin wide open for bacteria to enter.

Typically, these lesions begin in the mouth, then on the face and the mucous membranes of the genitals. Finally, they spread to the rest of the body. The patient may complain of pain, but a characteristic of the diagnosis is that the blisters don’t itch.

In any case, even with the presence of symptoms, the diagnosis is difficult for any professional. For this reason, professionals will usually request certain complementary methods, such as the following:

You may also want to read: Pimples on the Tongue, How to Remove Them?

The easiest form of pemphigus vulgaris to treat is when it’s caused by the adverse effect of a drug that the patient was taking. In that case, the mere suspension of the drug is usually enough. The blisters will soon disappear.

The rest of the clinical manifestations of pemphigus vulgaris require medical treatment guided by professionals with some experience in this type of condition. Among the most common therapeutic options we have:

Anyone suffering from pemphigus vulgaris should immediately consult a doctor. Treatment needs to be started quickly to avoid complications of the disease. Due to its characteristics, it’s not a pathology that can be managed without the correct professional advice.

Oral Herpes: Symptoms and Treatment
Oral herpes is often called "fever blisters" or "cold sores" and is easily spread through contact like kissing or sharing utensils. Read more »
Link copied!
Interesting Articles
Illnesses
Eczema and Stress: How Are They Related?