Sometimes, pediatric sleep disorders are rooted in patterns of inappropriate behaviors. Other times, they're due to organic reasons. In all cases, you should consult a specialist to determine what's the best treatment. Read on! 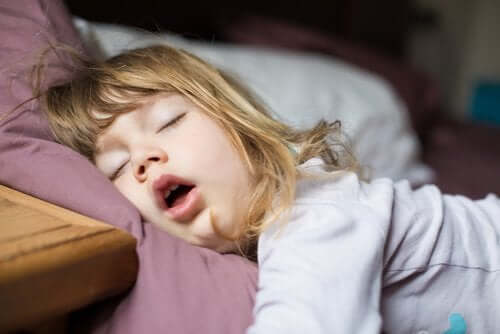 Sleep is essential for both children’s and adults’ physical and mental health. However, sleep is even more important in children. Unfortunately, it’s estimated that up to 30% of children currently suffer from pediatric sleep disorders.

Studies indicate that 50% of children have some trouble sleeping. Often, these problems aren’t diagnosed as pediatric sleep disorders because parents attribute them to an overindulgence of one type or another.

However, it’s true that not sleeping well affects a child’s behavior and learning ability, and also reduces their concentration and retentiveness. Not enough sleep can also affect their motor behavior, as well as making them more irritable and harming their self-esteem.

Therefore, it’s important to diagnose and treat pediatric sleep disorders as soon as possible. Learn more about them in this article.

What are pediatric sleep disorders?

Pediatric sleep disorders include all sleep-associated problems in children. They include, among others:

It’s normal for a child’s regular sleep pattern to be altered after an unusual event occurs. For example, a loss, a family conflict, etc. However, they soon return to normal. If the child doesn’t return to normal, then they’re suffering from a pediatric sleep disorder.

The main pediatric sleep disorders are classified as follows:

Parents may suspect the presence of a sleep disorder when their child has trouble sleeping, snores, or wheezes when they’re asleep. Also when their sleep is restless, they wet the bed, or are often drowsy.

The information parents provide is essential for diagnosis, which is initially based only on that information. However, the doctor may request some tests, such as:

Also, doctors may request a complete blood count in cases of excessive sleepiness and irritability. This can rule out or confirm the presence of anemia, parasites, and thyroid problems.

You should also read: Habits to Help you Cope with Sleep Apnea

Treatment for these problems depends on the cause. Thus, it’s always advisable to consult your pediatrician so they can decide on an appropriate treatment plan. However, first of all, it’s advisable to ensure the child’s proper sleep hygiene.

Also, you should know that sleep needs vary according to age:

From a behavioral standpoint, one of the most commonly used treatments to correct pediatric sleep disorders is the Ferber method. It’s a highly effective treatment that’s applied to infants. Basically, it consists of creating a series of routines to sleep-train a baby.

If parents suspect that the problem has a physical origin, they must consult a specialist.

Illnesses
What's the Cause of a Strong Body Odor?

Illnesses
The Causes of Alcoholism: Consequences and Treatment

Alcoholism is the excessive consumption of alcohol, where one loses control over how much they drink. Below we'll explain some…

Illnesses
What Does a Cough with Green Phlegm Mean?

What happens when green phlegm accompanies a cough? Is it always an infection that should be treated with antibiotics? This…

Illnesses
What Is Papillary Edema or Papilledema?

The papillary edema, also known as papilledema, is a pathology that occurs in the eye. It consists of an inflammation…

The appearance of cold sores in children can be worrying at first. These lesions are benign and tend to disappear…

Interesting Articles
Illnesses
The Relationship Between Asthma and Rhinitis

Coconut milk is a type of plant milk derived from coconut flesh. Due to its delicious flavor and nutritional value,…

Healthy mind
What Are the Symptoms of Alexithymia?