Parenting Styles: What Kind of Parent Are You?

Parenting styles represent how parents react and respond to their children. In this article, psychologist Marcelo Ceberio talks about the different types that exist. 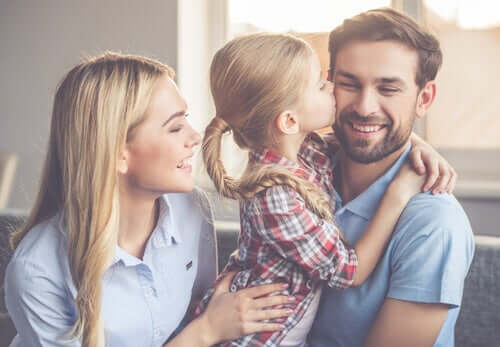 Parenting styles are relational constructs that involve parents’ conscious and voluntary and involuntary behavior, attitudes, gestures, and verbal and paraverbal messages with their children and the technical and tactical or communication strategies they use.

No institution teaches people how to be parents. Instead, people learn this role through how they were raised. Also, it’s characterized by the actions and corrections parents believe to be correct. Thus, the family of origin is the benchmark when it comes to raising children.

However, parents are also mirrors of their children. In other words, parenting styles involve an involuntary passage of information. Thus, parents are more transparent than they think. They transmit values, beliefs, forms of emotional expression, communication styles, and commands, among other things. Find out more below.

Parenting styles. What kind of parent are you?

Psychologist Diana Baumrind developed one of the best-known theories on parenting styles. She classified parents into four categories:

Discover: Rich Kid Syndrome: A Mindset that Results from Parenting

These types of parents are balanced and maintain open communication with their children. This is the best way to get children to understand.

Also, they’re demanding, responsive, and are focused on their children. In addition, they want their children to become autonomous and mature adults. Likewise, they understand their children’s feelings and teach them to manage them.

Generally, they’re not that controlling. This allows the child to explore more freely, and they can make their own decisions based on their own ideas.

By supporting their children’s personal initiative, these types of parents allow them to solve the problems they face on a daily basis. So, consequently, this leads to autonomy.

When they punish their children, they explain the reasons for the punishment, which are usually not severe nor arbitrary. This is because, although they usually forgive, they try to teach rather than punish. Thus, this may lead to children with higher self-esteem and autonomy.

Also, this parenting style proposes clear rules and sets boundaries. Likewise, it allows children to develop their independence. In addition, these parents expect mature behavior from their children but always according to their age. In other words, they should behave according to their stage of development.

They value their children and are attentive to their needs, concerns, and interests. For these reasons, experts consider it the best of the parenting styles.

These parents aren’t receptive and have high expectations for their children. Also, they impose a totalitarian regime characterized by high compliance expectations with family rules. Thus, there’s little open dialogue between parents and children. In other words, children aren’t allowed to question an order.

In addition, this parenting style is restrictive and these parents punish their children when they don’t meet their expectations. Also, they expect their children to respect the work and effort they make by raising them.

They don’t promote dialogue and sometimes reject it as a disciplinary measure. For example, “Don’t talk to me until you do what I told you to do”. Often, the only explanation they give their children is “because I told you to”.

Likewise, they’re less sensitive to their children’s needs and are more likely to hit or yell at them rather than discuss the problem. Children who endure this type of parenting can have fewer social skills because their parents usually tell them what to do, instead of allowing them to choose for themselves.

These parents exercise discipline without giving their child any autonomy. Thus, they consider obedience a virtue, which is why they prefer punishment.

These types of parents are very sensitive to their children’s needs and desires. Also, they don’t tend to have too many expectations regarding behavior. In this parenting style, the parents are very involved. However, they don’t demand much from their children and don’t have a lot of control over their lives. The lack of boundaries doesn’t allow children to acquire self-control skills.

Children of permissive parents tend to be immature, to not control their impulses, and aren’t socially responsible. In other words, they tend to be more impulsive and, during adolescence, can become social outcasts. Also, these children never learn to control their own behavior and always expect to get away with whatever they do.

This parenting style results in bratty or spoiled children who demand things from others to get what they want.

These parents are neither demanding nor flexible. Also, they’re cold and usually don’t involve themselves in their children’s lives. Thus, they don’t demand or set boundaries nor make them take on responsibilities.

Children with neglectful parents believe that other aspects of their parent’s lives are more important to them.

Neglectful parents often ignore their children’s emotions and opinions. Likewise, they don’t support them but instead limit themselves to providing for their basic needs (housing, education, and food). Often, they’re absent emotionally and sometimes even physically; that is, there’s no communication, even if they’re physically present.

In addition, they aren’t sensitive to their children’s needs and don’t expect them to behave in one way or another. Children who were raised in a negligent environment may have emotional and behavioral problems as adults.

The lack of affection and advice in these children and teens has very negative effects on their development. Therefore, they may feel insecure, devalued, and dependent. They have difficulty socializing and low frustration tolerance.

During my work with teenagers, I’ve seen many parental peculiarities in interviews with parents. Based on Baumrind’s parenting styles, I can highlight several parental types. However, you should know that most parents combine several types, which is why parenthood is somewhat biased.

Parents who feel guilty if they set boundaries. They seek to be recognized and loved by their children. Thus, they believe that saying “no” will lead to rejection.

They encourage their children by discovering each of their possibilities. Also, they value and motivate them.

They always talk about what their children didn’t achieve. Thus, they don’t appreciate what they achieved but only focused on what they failed to do. It consists of implicitly devaluing them.

They’re dictators who don’t explain the reasons behind their boundaries and orders. What their children want doesn’t matter. Instead, they only focus on what they believe is best for them.

Parents who believe that giving and supplying all their children’s needs and comforts ensures their proper development.

Parents who overly contemplate what their children want and don’t put a brake on their ideas. In other words, they don’t set boundaries. They tend not to guide them and end up under the authority of their own children.

These parents need their children’s affection and recognition, seeking to please and be valued by them. They’re convinced that the best place for their children is home.

They overprotect their children and don’t encourage their independence. They’re basically fearful that something can happen to them. They act and do everything for them.

Parents who guide their children. They give them advice but also give them the freedom to make their own decisions. For example, they give them material things as a stepping stone towards independence. They know they need to let go of them.

They believe they can do it all. They offer their children everything they need and more. They’re convinced this is the best way to raise their children.

They prioritize communication and explaining what’s tacitly implied in the family. They don’t pressure their children. Instead, they respect moments, ask questions, and avoid assuming things.

They encourage freedom and independence without measuring their children’s actual emotional world or maturity to become independent.

They’re emotionally nourishing. In other words, they express affection and appreciation with words and their attitude.

Discover: 5 Parenting Mistakes We Make with Our Children

Far from the utopia of ideal parenting, raising children is synonymous with learning every day.

Hyper Parenting: A Way Create Unhappy Children
Hyper parenting is defined as the excessive lavishing of attention on your children, similar to over protection or sheltering. Learn more about it here. Read more »