After being diagnosed with a degenerative muscular disease at an early age, doctors recommended that Marieke Vervoort stay active. She found a reason to move ahead with her life in sports. Although she's made it clear that now is not the time, Vervoort knows that when the time comes she wants her death to be on her own terms. 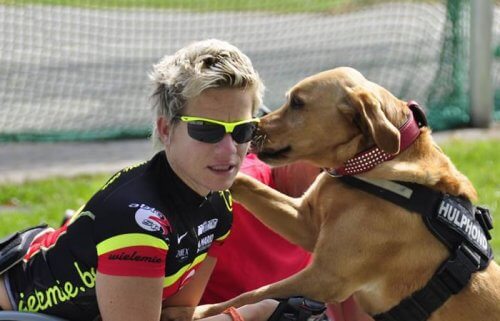 After being diagnosed with a degenerative muscular disease at an early age, doctors recommended that Marieke Vervoort stay active. She found a reason to move ahead with her life in sports. In Río in 2016,  she won three Olympic medals. Now Marieke Vervoort opts for euthanasia to end her life.

Marieke Vervoort is a fighter. She is a 37-year-old Belgian athlete who prepared documents for euthanasia in 2008. Although she makes it clear that now is not the time, she knows that when the time comes, she wants her death to be on her own terms.

We all know that we don’t have total control over what comes our way in life. Diseases, accidents, unexpected events…these challenges all shape us and test us.

We can’t choose what life has in store for us, but sometimes we can choose how to end our life.

Marieke Vervoort has once again opened the discussion about euthanasia. She also set off the false rumor that she was planning to say goodbye to this world after the para-Olympic games.

Obviously, this is not true. It’s not her time, but her wise, sensible and courageous words have impressed the entire world.

Whether or not we agree with the idea of euthanasia, we can all agree upon one thing: this great woman deserves is our complete respect and absolute admiration.

Today we would like to tell you her story.

Marieke Vervoort goes through life with the intensity of someone who wants to take in everything: every new day, every image, every sound, every breath of fresh air.

She participates in track and field, land yachting, and was even a triathlete before her disease took away her movement. It’s worth noting that although she earned a silver medal in the Río games in 2016, it is just one of the many trophies she received in her career.

Types of pain and the art of saying goodbye.

According to Marieke, this will truly be her last race in the Olympic Games. Consequently, Marieke Vervoort opts for euthanasia to end her life, when she is ready to let go.

Marieke suffers from a degenerative muscular disease that left her in a wheelchair from a very early age.  The real problem is not in the incapacity itself, but the physical suffering she endures every day.

Marieke has been fighting her condition every day for 20 years. She sees her own body respond a bit less every year that goes by.

Sometimes she passes out, has epileptic seizures, experiences intense pain, and she knows that she will go blind in a short amount of time.  She currently only has 20% of her vision. In a few months or in a few years she will be completely overcome by darkness.

With this chronic illness, she is sentenced to a life of permanent disability.

Vervoort knew what was going to happen from a very early age. After the diagnosis, she admitted that she had even contemplated suicide. However, something happened.

Her doctors told her that a great way to have a quality life would be to stay active.  Sports signify fighting and surviving.  She took to this idea and found a powerful reason to continue living.

Marieke began to play basketball in a wheelchair and later started scuba diving and swimming.  She truly found herself when she participated in a triathlon where she won first prize and gained recognition.

She was the world para-triathlon champion in 2006, an award she won two years in a row.

In 2008, she was no longer able to participate in the triathlon due to her illness, which was progressing.  Her life stopped.  However, her country reached out to her and asked her to tell her story, so she gave her testimony on TV.

Marieke then published her book titled Sports for Life.  At the same time, she was also undergoing another important task: preparing her papers for euthanasia.

Her body no longer functioned for the sports that she so loved, and she knew that in a few years her body and vision would shut down forever.

Her time has not yet come, but someday it will

Since putting the triathlon aside, she began pursuing a sport known as land yachting. Land yachting is a sport that involves racing in a type of car that is propelled by the wind with a sail. Marieke was awarded runner-up in land yachting in 2011.

Mbah Gotho, the Man Who Claims to be 145

After this, another specialty arrived on the scene: wheelchair sports. After being included in the T-2 category, Marieke dominated all of the continental records.

When she goes completely blind, when nothing remains but pain and paralysis and when her body no longer belongs to her, she will say goodbye. Euthanasia is not a surrender, but a rest for the most courageous.

Marieke already planned her funeral. She wants her ashes tossed in the Lanzarote sea in Spain’s Canary Islands. She wants to be remembered by everyone with a smile.  This is how she will see all of them when she is resting in peace and no longer suffering.

Stephen Hawking’s Message to People Who Are in a “Black Hole”
Stephen Hawking is an example of strength and overcoming obstacles. He never allowed his condition to weigh him down psychologically. Read more »
Link copied!
Interesting Articles
Did you know?
New Year's Traditions Around the World

Interesting Articles
Illnesses
Eczema and Stress: How Are They Related?