Paget's Disease - Everything You Need to Know

Paget's disease is a condition that affects the bones by altering their density and, therefore, their characteristics and functionality. 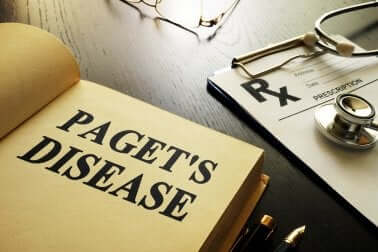 Paget’s disease is a disease that affects the bones, altering their characteristics and functionality. Thus, bone structures can vary in terms of consistency, density, and even size. It’s also called deforming osteitis.

Recently, researchers proved that it affects certain bones more frequently, such as the spine, skull, pelvis, and femur.

How does bone tissue work?

In general, you can find the characteristic cells in bone tissue: osteoclasts and osteoblasts. Osteoclasts are responsible for destroying the old or outdated bone tissue, while the latter regenerate the corresponding areas. This way our bones renew continuously thanks to the coordinated functions of these cells.

However, in Paget’s disease, osteoclasts and osteoblasts act more rapidly, hyperactively in fact. This causes certain regions of the bones to grow abnormally and become fragile.

A high percentage of clinical cases are asymptomatic — that is, patients have no symptoms. However, it’s possible for them to develop a series of signs or alterations associated with this disorder. The most common symptoms include:

See also: Strengthen Your Bones and Alleviate Pain in Your Joints with this Natural Drink

Scientists don’t yet know what causes the development of this disease. However, according to their research, it could be due to a viral infection such as measles. The influence of genetic factors (family history) and environmental factors (exposure to certain chemical substances) is also under scrutiny.

As a general rule, a medical team does a series of medical tests that allow the identification of this disorder and the disposal of others with similar symptoms. Therefore, they perform:

Usually, a person doesn’t need specific treatment for this disease because most of the cases are asymptomatic. However, the medical team may recommend the application of certain therapies in the most serious cases:

You may be interested: 8 Natural Ways to Strengthen Your Bones

A series of measures that can effectively reduce the risk of this disease hasn’t yet been found. However, it’s important to take care of your health to enjoy an adequate quality of life.

In order to do this, we need to carry out moderate physical activity along with a balanced, adequate, and healthy diet. It’s also advisable to avoid the practice of unhealthy habits such as alcoholism, smoking, or the consumption of toxic substances, such as drugs.

Finally, note that Paget’s disease has to do with genetic variants that predispose a person to suffer alterations in bone metabolism. For this reason, it’s important to report if there are family cases and to carry out a complete medical history that, in addition to the affected relatives, includes the degree of affectation and limitation it produces.

Treatment to Strengthen Bones and Joints
Strengthening your bones doesn’t need to require laboratory medicine. In fact, there are other natural alternatives which can be used as a complement or as your main treatment. Read more »
Link copied!
Interesting Articles
Illnesses
The Symptoms and Treatment of Granuloma Annulare