Opioid treatment allows people to control intense cancer pain. However, these drugs can lead to numerous side effects so people should use them carefully. Continue reading to find out more about it. 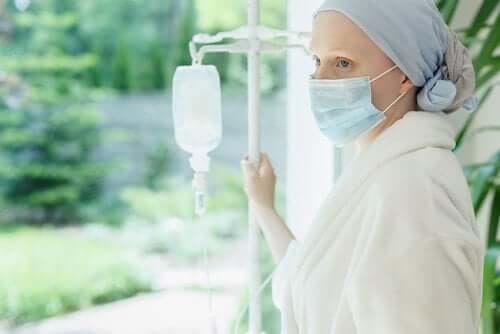 People with cancer commonly an opioid treatment to deal with intense pain. Often, pain that’s intense and disabling arises due to the pressure from the tumor itself. It may also be due to certain treatments or the subsequent alterations of the immune system, among other causes.

Today, cancer is one of the most significant health problems. Estimates indicate that millions of people die each year from this disease. Also, about 40% of cancer patients undergoing treatment experience pain.

Unfortunately, in the final stages of cancer, this kind of pain appears in about 80% of patients. It’s a complex situation that’s difficult to address. Each person responds in a way to a certain treatment and often include highly potent drugs.

How cancer pain is treated

As we mentioned above, the treatment of cancer pain must be personalized. Thus, doctors must adapt it to each patient because it depends on their type of cancer, its cause, and even on their perception of pain.

However, there’s a general pattern of cancer pain treatment depending on its intensity. This scale goes according to the standards of the World Health Organization. The following groups of drugs are from less to greater pain intensity:

To classify pain, doctors must properly assess each one of their patients and they use pain scales for it. Pain scales score different characteristics of pain to classify it somewhere between mild and unbearable.

Generally, pain is the result of more than one mechanism. Thus, it may be necessary to mix and match medications.

What are opioid drugs?

Opioid drugs are drugs obtained from opium and that also act on brain receptors or opioid receptors. They’re distributed throughout the central and peripheral nervous systems.

What these drugs do is join those receptors and curb nerve stimuli. Thus, by slowing down the stimulus, they cancel the transmission of pain.

However, you must keep in mind that these medications have numerous side effects. First of all, it’s important to note that a large part of opioids, such as morphine, are addictive and may lead to dependence. Similarly, they might increase the feeling of tiredness and weakness. Another risk is they may lead to depression of the respiratory system. So, doctors must be very careful with the dosage and people should only use them under medical supervision.

You may be interested: Tramadol: What Is it and What’s it Used For?

As we indicated above, the most common drugs used in this step are tramadol and codeine. A patient can take them in different ways. Either to delay their release or for immediate, direct action. They can also use them along with other drugs, such as nonsteroidal anti-inflammatory drugs (NSAIDs).

For example, codeine is for oral intake. However, patients with liver or kidney problems should avoid using it.

These drugs are specifically for cases where cancer pain is almost intolerable. Morphine is the most common one because its mode of application is highly versatile.

Also, morphine has no “analgesic ceiling.” Thus, doctors may change dosages. However, the dosage limit is determined by its side effects, because an overdose can lead to death.

Opioid treatment for cancer pain is complex. Therefore, doctors should prescribe it according to the characteristics of each patient. As you can see, it should always be a doctor who chooses it and decides the guidelines for this kind of treatment.

What Are Prescription Opioids and What Are They For?
Doctors sometimes prescribe prescription opioids because they're strong painkillers. The best-known form is morphine, but there are many others. Read more »
Link copied!
Interesting Articles
Treatments
Advantages and Disadvantages of LASIK Surgery