Opioid Drugs: What is Propoxyphene?

Propoxyphene is a drug that has a very potent analgesic effect and belongs to the opioid family of drugs. Like all substances of this therapeutic family, propoxyphene produces dependence and tolerance in the patient who receives it. 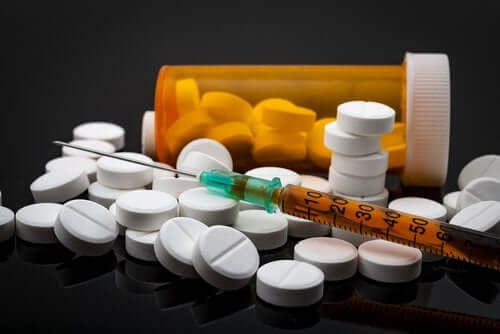 Propoxyphene is an opioid drug structurally related to methadone. Opioid drugs provide a very high analgesic effect and it’s because of this characteristic that they’re used to relieve mild to moderate pain in teeth, head, back, bones or in arthralgia, myalgia or migraines.

It’s important to mention that both propoxyphene and other drugs of this therapeutic family can trigger a tolerance effect in the person who consumes it. This fact makes it necessary to increase both the dose and the frequency of administration of this type of medication.

How does propoxyphene trigger the analgesic effect in the body?

Propoxyphene, like all opioid drugs, provides the analgesic effect by binding to opioid receptors, which are found both inside and outside the central nervous system. These receptors include the μ, κ and δ receptors.

All these receptors are associated with G proteins and act as positive or negative modulators of synaptic transmission, which takes place through these proteins.

Opioid drugs don’t alter the pain threshold of nerve endings, nor do they affect the transmission of impulses along peripheral nerves; what they do is to modify the perception of pain. Like the other opioids, the analgesic ceiling of propoxyphene is very high; one could even say that it has no analgesic ceiling.

Pharmacokinetics: what happens to propoxyphene in the body?

Pharmacokinetics covers the processes of absorption, distribution, metabolism, and elimination of a drug. In this sense, propoxyphene, once administered orally, is absorbed mainly in the upper small intestine. Once absorbed, it reaches its maximum plasma concentrations 2-3 hours after administration.

For its distribution, it requires plasma protein binding. Specifically, 70-80% of the drug binds to these proteins. This fact is important to take into account since it favors interaction with other drugs that also need these proteins for their distribution.

If the physician administers them together, it can displace propoxyphene and the percentage that isn’t bound to this molecule, which is the one that performs the action, increases considerably. As a consequence, this can trigger a toxic picture of this opioid.

After its distribution, it mainly metabolizes in the liver, giving rise to a main metabolite: norpropoxyphene, which is also pharmacologically active. Lastly, once metabolized, both the metabolites and the fraction of drug that remains unmetabolized are excreted in the urine.

Like all drugs on the market, propoxyphene isn’t exempt from producing a series of adverse effects. We understand adverse effects as events that occur in an undesirable and unintended way in the treatment with a drug. You should be especially careful as it’s an opioid drug.

In this regard, we’d like to mention the following reactions reported once the drug was put on the market:

In addition, as mentioned at the beginning of the article, propoxyphene triggers a significant tolerance and a dependence similar to that of morphine. These effects have been studied in clinical trials.

Therefore, it’s essential not to abuse this type of medication and to always follow medical recommendations. In addition, an abrupt withdrawal of propoxyphene can trigger a major withdrawal syndrome with serious health consequences.

Discover: Opioid Addiction – Why Does it Happen?

Propoxyphene is an opioid drug that has a very potent analgesic effect and belongs to the opioid family of drugs. Like the rest of the substances of this therapeutic family, propoxyphene produces dependence and tolerance in the patient receiving it.

Therefore, you should never self-medicate or abuse this type of substance. Misuse of the medication can have fatal consequences for the person involved. You can ask both your doctor and pharmacist about any doubts you may have regarding this medication.

What Are Prescription Opioids and What Are They For?
Doctors sometimes prescribe prescription opioids because they're strong painkillers. The best-known form is morphine, but there are many others. Read more »
Link copied!
Interesting Articles
Medication
Magnesium Deficiency: Low Magnesium Levels in the Blood