Polyps in the nose, unlike polyps in other areas of the body, rarely represent a serious health problem. Only in rare cases are they related to cancer, which is verified by biopsy. In other cases, they're benign lesions. 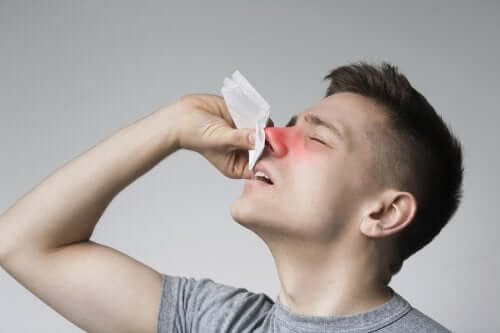 Nose polyps are soft, sac-like growths in the lining of the nose or sinuses. This condition occurs most often in adults and only very rarely in children under 10 years of age.

Specialists estimate that polyps in the nose occur in between 1 and 5% of the population. They affect men and women more or less equally, although their incidence is slightly higher in men. They most commonly occur in people between 30 and 40 years of age.

This disease is considered to be a variant of sinusitis, more precisely polypoid sinusitis. The size of polyps in the nose is very varied: they can be very small or become quite large. In some cases, they don’t cause major problems, but in others they cause obstruction of the nasal airway.

What are nasal polyps?

Nose polyps are whitish-white, soft-textured and often teardrop-shaped formations. Their appearance is similar to that of a seedless peeled grape. They appear inside the nostrils or sinuses. They may be single or multiple.

Doctors consider them benign lesions. Unlike polyps that appear in the bladder or colon, polyps in the nose are not tumors and pose a minimal risk of cancer. They’re usually due to chronic inflammation and doctors often associate them with asthma, immune disorders, allergies, etc.

These formations appear when the natural mucosa present in the nasal passages or sinuses hypertrophies. In these cases, the mucosa grows and fills with a thick liquid. Gradually this accumulation takes shape and forms polyps. This condition is called nasal polyposis.

Also read: The Different Types of Nose Shapes: What’s Yours?

There’s some controversy as to the causes of nasal polyposis. Traditionally, specialists have accepted that this process is related to some type of allergy, but there are also cases where this condition isn’t present. Doctors don’t fully understand the evolution of this disease yet either.

There’s data that indicates that mucosal chemical markers and immune system responses are different in those who develop nasal polyps and those who don’t. This suggests that some genetic mutations may be involved in this issue.

In any case, scientists have established a list of conditions that operate as risk factors for this disease. This list includes:

In some cases, polyps appear during an infectious process in the nose and then disappear when the infection subsides. They also form when there’s a foreign body lodged in the nose.

When polyps are small, they generally don’t give rise to any symptoms and therefore usually go unnoticed. If they begin to increase in size, then they become noticeable and may cause discomfort or become a source of nasal airway obstruction.

It’s common for large polyps to cause a sinus infection, which becomes a common symptom of polyposis. Nasal congestion, some degree of loss of sense of smell and taste, as well as rhinorrhea, headache, pain in the area, and signs of a cold are also common.

In some cases, people with nasal polyps may have to breathe through the mouth. This is because there’s an obstruction in the nasal passage which blocks it, to a greater or lesser extent. There are times when the polyp is even present in the nasal passages.

Discover: Taking Care of a Common Cold at Home

The most effective measure to treat nasal polyps is extractive surgery. However, patients and doctors tend to take other measures to cure them before surgery, especially if they aren’t too big.

Most commonly, treatment is started with the administration of corticosteroids, by means of nebulizations in the nostrils or orally. Corticosteroids usually produce side effects, so the doctor and the patient must carry out strict follow-up.

Doctors commonly use antihistamines and antibiotics. If the polyp is very large and causes some degree of obstruction, surgery is advisable. However, studies have shown that polyps can re-form after this procedure. Visit your doctor to find out what to do in your particular case.

4 Home Remedies to Remove Nose Scabs
Due to conditions such as weather and humidity or nasal congestion, nasal mucosa can develop nose scabs that cause discomfort and pain. Read more »
Link copied!
Interesting Articles
Illnesses
Perineal Tears: What They Are and How to Recover from One