Clitoral Circumcision Is Banned in Nigeria

It's important to continue educating and raising awareness of the health risks that come with this terrible practice that is still being carried out. 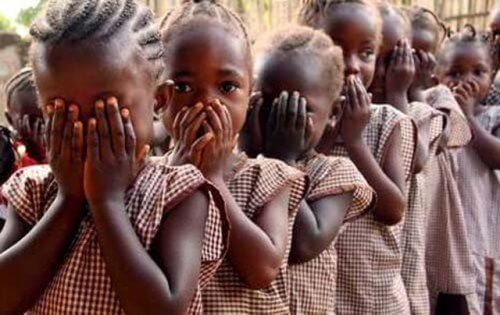 Mutilation of the clitoris, clitoral circumcision or “female circumcision” is the partial or total removal of the female genital organs. They specifically focus on the clitoris.

Many cultures, especially those of indigenous African descent, practice this as part of their beliefs.

But, thanks to the efforts of the World Health Organization, many countries and native communities have stopped. Thus, rescuing many young girls from this painful procedure.

This news are really important for those fighting against this practice. Nigeria is Africa’s most populated country with an estimated 20 million women and girls.

It’s an important step in getting rid of what most people consider to be an abhorrent practice. Sadly, they still perform this barbaric act in 29 countries in Africa and Asia.

What is clitoral circumcision?

This custom is practiced on girls between the ages of 8 and 14. Their mothers go with them to an old, dark room. They rarely use sanitary methods.

There, a woman, who will perform the circumcision, waits with her razors and knives. She will carry out the horrible procedure. This can take up to 15 minutes.

Once inside, the woman examines the girl’s genitals. Then, almost blindly, using a knife or other sharp object, begins to cut away the girl’s clitoris, labia minora and majora.

Then, without any type of anesthesia or hygiene, the woman mutilates the girl. All this while she screams and cries from the terrible pain. Inside the room, blood and pain pour out. Outside, the family celebrates that the girl is ready to become a woman.

When she is finished, the search begins for a husband who will give a good dowry. This is in exchange for the girl who is now considered a “woman”. Well, that is if the girl manages to survive.

Many young girls die from bleeding or shock caused by the intense pain and trauma. Others die from infections that inevitably occur from not using clean methods.

Because of this, the WHO has officially criticized female genital mutilation for years. Firstly, there is no medical need. Secondly, third parties usually perform this to deprive women of sexual pleasure.

And as if that weren’t enough, it’s been shown that clitoral circumcision causes serious consequences. These can include bleeding, urinary problems, cysts, infections, infertility and delivery complications.

Studies estimate that four girls under age 15 become victims of every minute. According to figures from NGO’s, the number of mutilated women is over 137 million. This is despite multiple protests and the constant fight to ban it.

Worst of all, this is still completely legal in 29 countries in Africa and Asia. This means 86 million girls could suffer from clitoral circumcision by the year 2030.

The law prohibits this in many countries. However, many cultures continue practicing it illegally.

You may want to read:

The future of clitoral circumcision

Luckily, the constant work of the WHO and other health organizations is bringing results. Notably, the decision in Nigeria.

Without changing indigenous cultures and traditions, it’s essential to raise awareness. We must change the mentality about this practice. It has claimed thousands of lives and still causes suffering.

The Incredible Story of Hope, The Child Witch
Believed to be a child witch, little Hope was abandoned and left to fend for himself. In this article, we'll discover his story of strength and courage. Read more »
Link copied!
Interesting Articles
Did you know?
Vegan Meat Substitutes: What Are the Best Options?