Why Popping Pimples Is a Bad Idea

Let's face it: we all like to pop those pesky pimples. However, popping your pimples can lead to lifelong problems that can be avoided by being careful about what you eat and what products you use on your face. 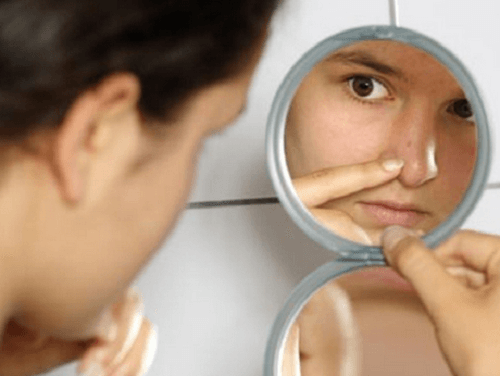 Have you ever had an urge to pop pimples? Well, think again! Popping your pimples can lead to lifelong problems that can be avoided by being careful about what you eat and what products you use on your face.

How many times has your mom or partner scolded you when they’ve caught you popping a pimple? And it probably didn’t matter; you still feel the urge to do it. Pimples are hard to ignore. They’re ugly, they hurt, and, if we’re honest, there’s something weirdly fascinating about popping them.

But is it really that bad to squeeze them? The answer is yes.

It has been proven that popping pimples is a bad idea. Even dermatologists warn that it’s counterproductive. They note that it causes many more problems than their bothersome presence does.

Pimples stay on your skin for a few days, while the consequences of using force on them can last your whole life.

Are you willing to risk that? If so, we encourage you to read on so that you can understand what’s really going on. First, we’ll dig a little deeper into what pimples are and why they appear. Then, we’ll talk about the two main reasons why you shouldn’t pop them.

Read more: Skin Spots and What Causes Them

What are pimples and why do they appear?

We tend to associate pimples with adolescence, but most people don’t understand why they appear. As usual, their origin can be found in the body’s own system. We accumulate more toxins than the body can handle through food, drinks, air quality, or hormonal changes.

One of the warning signs our body gives us is the appearance of pimples.

Following this line of thought, if you have a lot of problems with acne or pimples, then you might want to consider changing some of your habits. That way, you won’t even have any pimples to pop!

As for food, it’s recommended to be careful and reduce your consumption of:

These are very difficult to digest and the damaging compounds stay inside of your body. In an attempt to get rid of them, the body turns them into pimples. The same thing happens with alcoholic beverages and carbonated drinks.

See also: Sugary and Carbonated Drinks Harm Your Body and Here’s Why

At the same time, you must also be careful what makeup you use and how often you use it. The cosmetic industry is working at improving their products to make them better for the skin. However, they haven’t gotten all the way yet, and the products that have come close are not easily accessible to everyone.

That’s why you should let your skin rest at least a few times a week and carefully read the ingredient list of all products you use. It’s also good to apply natural remedies to repair and moisturize the skin.

Now let’s take a look at the two main problems when you pop a pimple.

Why popping pimples is bad for you

1. You may get an infection

Since you’ve probably removed at least one pimple in your life, you also probably know it leaves a little mark afterwards. Normally, we don’t pay much attention to it (after all, the annoying pimple is gone!), but it acts just like any other wound. That means you run the risk of getting an infection.

As a result, you may end up treating it with antibiotics, which cure the complication but are damaging to your overall health. In other words, the damage is doubled.

2. Your face may become scarred

Actually, there are even more side effects. Have you ever seen people whose faces are covered in scars? In most cases, these are due to popping pimples.

Some people have very sensitive skin. When their pimples are popped, it leaves marks that are impossible to get rid of. Many opt to cover them with makeup, but this route is not very advisable, as this can cause even more acne.

The best course of action is to let them go away on their own. If they are constantly appearing, however, you should see a doctor. Specialists will prescribe lotions and creams that treat the area to keep them from appearing.

Either way, it is good to wash your face with natural cleansers, toners and moisturizers. Prevention is always the best cure.

Overall, popping pimples is always a temptation, but next time think about what you just read before you do it. No one wants a pock-marked face or antibiotics in their blood if they can help it.

8 Foods that Improve Your Skin Health
In addition to taking care of your skin health, you can also optimize its condition through your diet if you make the right choices. Read more »