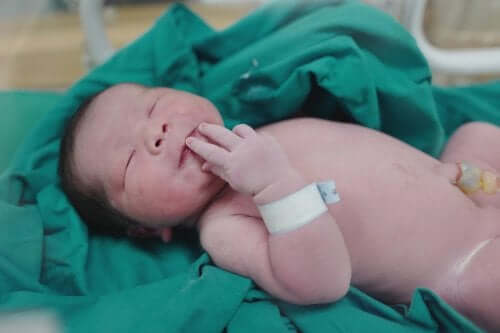 Neonatal abstinence syndrome (NAS) is a collection of symptoms experienced by babies whose mother has abused certain drugs during pregnancy. In reality, it can occur either before or after the baby is born.

It can occur in pregnancies where the mother takes drugs such as heroin, alcohol, methadone, or even marijuana. Many kinds of drugs cross the placenta, which connects the baby with its mother in the uterus. This is why the baby becomes dependent on the drug, just like its mother.

Sadly, experts estimate that one in ten babies has been exposed to drugs during gestation. In this article, we’ll explain what neonatal abstinence syndrome consists of and how to avoid it.

What are the causes of neonatal abstinence syndrome?

As we’ve said, neonatal abstinence syndrome occurs in babies because the mother ingests drugs or narcotics during pregnancy without considering her condition. However, it doesn’t occur with all drugs. For this condition to occur, the drugs must cross the placenta and reach the fetus. Additionally, they must be substances that tend to form dependence in users.

This syndrome can occur either before or after the baby is born:

Which substances can cause it?

As we mentioned before, the majority of drugs have effects on the fetus. However, it’s true that some substances are more likely to cause this syndrome.

Firstly, it’s important to know that opioids cause this problem in more than half of the babies concerned. That is to say, babies whose mothers take heroin or methadone have a 50% chance of suffering from neonatal abstinence syndrome.

Although many don’t realize it, consuming alcohol during pregnancy is one of the most damaging things to the child. Alcohol can also produce this syndrome. Additionally, it can even produce very serious conditions like deformities and mental retardation.

Then again, the same thing happens with amphetamines and barbiturates. Barbiturates are sedative and anxiolytic substances consumed by a large portion of the population, although with a prescription.

However, cocaine isn’t capable of producing this syndrome. But that’s not to say it isn’t toxic to the fetus. In fact, many studies confirm that cocaine consumption makes fetal development problematic.

What are the symptoms of neonatal abstinence syndrome?

The symptoms of neonatal abstinence syndrome will depend on the substance that’s causing it. Additionally, it will also vary according to when it was last consumed. Symptoms typically occur one day following birth, or even up to five days after. Every baby experiences this condition differently.

The most common symptoms are:

Oddly enough, premature babies tend to have lighter symptoms and to recover more quickly. Even so, the majority also experience fever and nasal congestion.

The only way to avoid neonatal abstinence syndrome is for mothers to avoid consuming psychoactive substances during pregnancy, and to be conscious that what they ingest can affect the fetus. If you’re pregnant, try not to consume any type of drug during this time.

If, on the other hand, you know a mother who’s in this situation, try to consult a doctor. They will be able to help you advise her and encourage her to stop consuming. All precautions are helpful when it comes to protecting the child.

What Are the Most Dangerous Drugs in the World?
Drugs are a tough issue that involve a lot of controversy. It’s important to define what drugs are and how they are understood by the people who use them. Remember that addiction can vary from person to person, as well as gender. In this artcile, you'll learn about the most dangerous drugs. Read more »
Link copied!
Interesting Articles
Babies
Discover Why Babies Stare