People with narcissistic personality disorder often have little emotional empathy. They're also not very tolerant of criticism and have interpersonal difficulties. 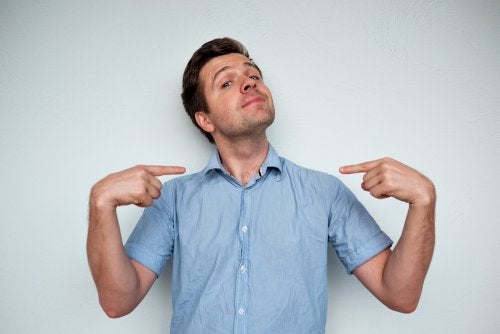 Narcissistic personality disorder is a mental condition that causes the individual to have an exaggerated sense of self-centeredness and little genuine empathy for others. Typically, the person usually thinks s/he deserves special treatment and has an extreme need to be the center of attention.

Generally, they often have shortcomings in their interpersonal field, because they focus all of their attention on themselves and don’t care about what happens to others. In fact, they often only approve of third parties when they validate their self esteem through constant flattery.

However, behind their mask of extreme security, there is a fragile self-esteem that can be deteriorated with the slightest criticism. Because of this, they tend to easily fall into depressive states, since they feel unhappy and disappointed when they don’t live up to their expectations.

Likewise, they often don’t ever feel satisfied with their relationships because they constantly compare people to themselves, and there is no one as great as them.

What are the causes of this disorder? How can you identify it?

In today’s article, we’ll tell you which factors can trigger is and which signs can help you identify it.

As with other mental health disorders, there’s no exact cause to explain narcissistic personality disorder. However, experts believe it’s the result of a combination of neuro-biological, genetic and environmental factors.

Considering this, a person has a high risk of suffering when:

Overall, there are many signs that can help us identify narcissistic personality disorder, as well as the severity with which they occur. Often, the person who suffers it self-centered, exaggerates their abilities and looks at others as inferior.

In addition, other symptoms include:

Similarly, a person with narcissistic personality disorder has little tolerance for criticism and has difficulty facing any situation where the opposite is true.

In order to confirm this mental illness, health professionals consider the criteria of the diagnostic and statistical manual of mental disorders (DMS-5). Plus, they will also do a physical examination and perform an intensive psychological evaluation.

Unfortunately, it’s often very difficult for a person with this disorder to access and accept treatment.

Due to their egocentric behavior and belief that they are perfect, they usually won’t accept that they have a problem. Therefore, they often won’t consider getting help.

However, if he receives the diagnosis and does decide to go to therapy, the mental health professional with advise several sessions of cognitive-behavioral therapy.

Overall, its objectives are to:

Overall, there are no specific medications to combat narcissistic personality disorder. However, a doctor may suggest using anxiolytics or antidepressants to control the anxiety and depression symptoms.

Finally, it’s worth mentioning that the condition may worsen over the years. However, this dependson the cause and the person’s lifestyle.

However, the person can see a lot of improvement if has healthy relationships and keeps getting treatment. Overall, treatment is, essentially, the key.

7 Effects of Having a Narcissistic Mother
Having a narcissistic mother can mean that you aren't able to look after yourself and you continually try to satisfy the needs of others. Read more »
Link copied!
Interesting Articles
Illnesses
Hepatitis in Children: What You Need to Know