Sugar has become the focus of attention when it comes to healthy eating. It has both detractors and outright advocates. Who is right? Here's what we have to say. 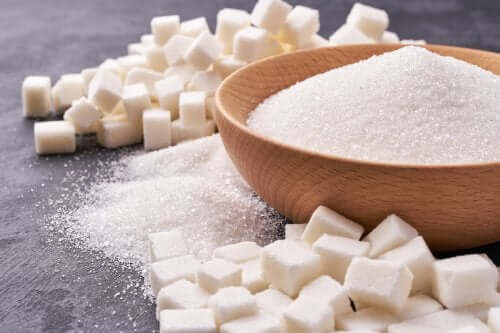 Myths have always existed in the field of nutrition, and myths about sugar intake are no exception. White sugar is very common in our diets. We find it in the table sugar that we use to sweeten other foods and, in addition, it’s also present in innumerable processed foods, even in the most unsuspected ones. How much sugar intake is too much? Find out here.

Lately, voices have been raised warning of its negative effects, and it has even been spoken of as a poison. However, there are also those who defend moderate intake. Who’s right? We discovered some of the most popular myths about sugar, keep reading to find the truth!

The body needs sugar: one of the most widespread myths

This is by far one of the myths about sugar par excellence. It’s true that the body needs glucose to function. It’s the main fuel of our cells since they obtain the necessary energy from glucose. The brain is also the main organ that demands glucose, from which it needs a constant supply in order to function.

The problem is that many seem to confuse glucose with sugar. The energetic substrate that the cells need to function is glucose and not sugar. Glucose, although many people may not know it, is present in many commonly consumed foods: fruits, tubers, legumes, among others.

In addition, the body is prepared to obtain glucose when food doesn’t supply it. It can draw on glucose stores (which we store as glycogen in our muscles and liver) or it can convert other nutrients into glucose.

Therefore, it isn’t necessary or indispensable to consume sugar. This is one of the reasons why ketogenic diets have proven to be viable. The process by which fatty acids are converted into glucose is very efficient.

Up to 2 oz per day are acceptable

The first thing we want to clear up is that sugar has low nutritional value, so we don’t recommend having a minimum intake. The latest guidelines from the World Health Organization regarding free sugars intake establish that

“The amount of free sugars per day should not exceed 10% of the total kilocalories consumed”.

Recently specialists have reduced this to less than 5%. Higher levels are related to overweight and obesity in the general population, as stated by experts. In addition, in children, it’s related to the emergence of dental problems such as cavities.

We must remember that free sugars are those added in the preparation of food and not those found naturally in it.

What you really need to understand is that this statement doesn’t recommend taking up to 2oz of sugar per day. What it does is establish a maximum limit that shouldn’t be exceeded. The less sugar added, the better.

The relationship between sugar and the obesity epidemic isn’t just another myth about sugar, but one that has plenty of scientific evidence behind it. We can’t reduce the problem of obesity to a question of energy balance.

Our body reacts differently depending on the type of carbohydrates we eat. It’s not the same to drink a sugary soft drink as it is to eat a plate of chickpeas. Even if, in the end, they provide us with the same calories, the physiological reactions that free sugars trigger can favor the appearance of obesity.

While it is true that sugar isn’t the only factor involved in obesity, an excess of sugar and processed foods in the diet is directly related to obesity. It also increases the risk of diseases associated with the latter, such as diabetes, hypertension or certain types of cancer.

In recent years, some countries, regions, and cities have been implementing different types of measures to reduce the consumption of sugar-sweetened beverages. One of them is a specific tax on this type of beverage. There are several reasons for implementing these taxes:

The experiences of regions such as California or Catalonia, and of countries such as France, Finland, Hungary, Chile, or Mexico have been positive. The purchase and consumption levels of this type of drinks have decreased.

This is why the rates on sugary drinks are recommended by the World Health Organization as an effective tool to reduce sugar consumption and prevent the appearance of some noncommunicable diseases.

Also read:8 Positive Health Changes When You Give up Soft Drinks

As the bad reputation of table sugar has grown, other alternative ingredients have appeared to sweeten our dishes:

But… are they really healthier? The truth is that some of these foods have a lower glycemic index or provide small amounts of some nutrients. But referring to these ingredients as healthy alternatives can make us fall into the trap of thinking that they’re harmless or beneficial to health.

And if we believe that they have benefits, or that they’re less harmful than sugar, we run the risk of increasing intake. They can be good options to stop consuming white sugar, but ideally we should get our palate used to the natural sweetness of the food.

Although we shouldn’t think that sugar is poison, it’s also true that it isn’t an essential food in the diet. So the best advice we can give is short and sweet: the less, the better.

Excessive Salt or Sugar Intake: Which Is Worse for Your Health?
Excessive salt and sugar intake have been linked to an increased risk of various chronic diseases. But which is worse, excessive salt or sugar intake? Read more »
Link copied!
Interesting Articles
Nutrition
Nutritional Information and Health Benefits of Peas