Pregnancy is a crucial period for the development of the fetus. For instance, a mother's microbiota deeply impacts fetal development. Today's article will discuss which possible diseases related to the future baby's brain are at stake during the gestation period. 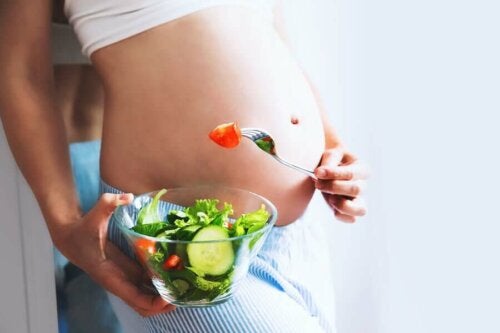 Did you know a mother’s microbiota has an impact on fetal brain development?

Most people know that pregnancy is a critical time for the development of a fetus and overall health. What we didn’t know is some illnesses can appear later in life. What this means is certain conditions could be related to what a pregnant woman ate and did during her pregnancy.

It isn’t easy to build a baby’s brain

The formation of a baby’s brain during fetal development comes at a high metabolic cost. Neurons proliferate frantically and relocate towards the future brain beginning during the first month of gestation. They’re merely following a perfectly outlined program.

The neural rate of division reaches the record of 250,000 cells per minute at this stage! Fetal development of a brain represents a large part of the total energy a mother puts into the development of her baby.

The total energy cost to form a new brain is about 40,000 kilocalories at the end of the pregnancy. This is more than half of its total energy cost. Research, such as that published by the journal Progress in Lipid Research in 1981 confirms this.

As you can see, the brain of a baby is already dependent on what their mother eats and does at this stage even before they’re born. In fact, a mother’s intestine could be an allied organ in fetal brain development.

This is yet to be confirmed, but some researchers believe that intestinal infections during the first six months of pregnancy increase the risk of brain dysfunction in a woman’s baby. At least, this is what studies, such as the one published by The American Journal of Maternal/Child Nursing in 2018, report.

They would consider some strategies to reduce the risk of infections if this is true. These would focus on controlling gut microbiota through controlled diets, prebiotics, and probiotics (i.e., foods that help maintain it).

Other studies such as the one published in 2018 in the JAMA magazine revealed that the development of diabetes (type I or type II) is a risk factor for autism in a person’s offspring.

Researchers conducted a study on children by following them throughout their first few years of life. They took note of those who developed autism and found their mothers had type I or II gestational diabetes.

The results revealed that the risk of autistic offspring increased by 62% during the pregnancy of mothers with diabetes. However, it’s clear why the latter might increase the risk of the former.

Poor diet and junk food increase the incidence of type II diabetes. However, there are unavoidable forms of diabetes, such as type I.

Omega fats and the risk of ADHD

A study conducted by Spanish researchers, published in 2019, revealed that the diet followed during pregnancy could influence the risk of ADHD (attention deficit hyperactivity disorder). The symptoms usually appear around the age of 7 years old.

The aforementioned research analyzed the proportion of omega-6 versus omega-3 fatty acids that mothers ingested during their pregnancy. Both are essential for fetal brain development and functioning throughout life; although, the adequate amount of these fats is particularly crucial during pregnancy.

There must be an adequate proportional intake of omega-6 and 3 (a ratio of 3 to 1). Omega-6 is particularly abundant in seeds, grains, and meats; thus, in vegetable oils. Similarly, omega-3 is prevalent in oily fish and other marine sources.

The results indicated there was a correlation between the disproportion of omega-6 and omega-3 and the increased risk of ADHD at the age of 7.

Furthermore, the researchers concluded that a proper diet during pregnancy can decrease the risk of ADHD in the long term.

Nuts are great during the first three months of pregnancy

The benefits of nuts are due to their high content of essential fatty acids (omega-6 and omega-3) and high content in microminerals and vitamin B9. These highly contribute to fetal brain development but particularly during this crucial stage.

Interestingly, the same health benefits on the neuropsychological development of the offspring weren’t present in those mothers who consumed nuts in abundance during the final three months of their pregnancy.

A mother’s microbiota is important, so C-section isn’t an ideal procedure

Historical developments and advances in C-section techniques and logistics have reduced the maternal and neonatal risks associated with the procedure. All the while increasing the number of pregnant women that give birth through this procedure for no medical reason.

The problem with this is that C-sections can lead to consequences in the health of the babies born through them. Research published in the journal Medical Archives, in 2013, confirms it.

According to this study, the mother’s “good” microbiota is missing in children born by cesarean section. This is because they usually obtain it through the birth canal and rectum. Meanwhile, “bad” bacteria are often present and can harm a child’s immune system.

Meanwhile, “good” bacteria in children born vaginally stimulate white blood cells and other components of the newborn’s immune system. This is the basis for the hypotheses that explain the clear association between morbidity and cesarean delivery mentioned above.

Women are often careful and cautious during pregnancy and want to offer the best for their offspring. There’s no doubt that the “good” intestinal bacteria is a great ally to fulfill this goal. So, make sure to pay attention to your gut…literally.

Birth Defects: What They Are and How to Prevent Them
Birth defects are anomalies that occur while the fetus is developing in the mother's uterus. Find out how to plan for a healthy pregnancy. Read more »
Link copied!
Interesting Articles
Pregnancy
Do Home Pregnancy Tests Work?