Mononucleosis in Children: What You Need To Know

Mononucleosis in children can appear as early as 6 months of age, although this is rare. In most cases there are no dangers or complications. 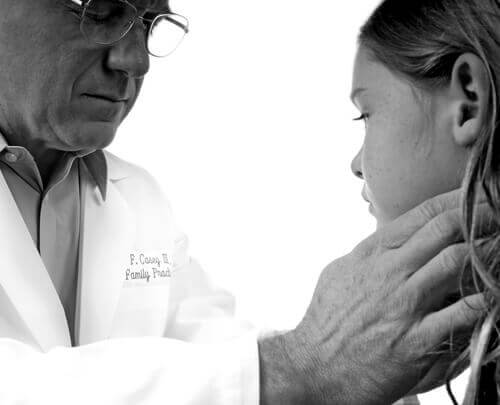 Mononucleosis in children under 15 years of age isn’t very common, but it can occur occasionally. This disease normally occurs in people who are between 15 and 25 years old, although it can occur in people outside of that age range.

Since it’s an infectious disease, it isn’t easy to stop the spread of mononucleosis in children, especially if they’re young. This disease can appear at 6 months of age, although it’s more serious if an adolescent or adult contracts it.

What is mononucleosis in children?

It’s an infectious disease, almost always benign, that normally resolves itself. It generally affects school-age children, adolescents, and young adults. Mononucleosis in preschool children isn’t very common, and, if it does occur, it rarely has symptoms.

Researchers estimate that 95% of adults between the ages of 35 and 40 have already been infected with this disease at some point in their life. Some don’t even know it, since asymptomatic forms exist and go unnoticed. However, the virus remains in the body in a dormant state.

Mononucleosis in children is more prevalent in regions with poor hygiene conditions, which favor the spread of the infectious agent. Generally, people only suffer from it once in a lifetime. Despite this, the virus can become reactivated, particularly in patients undergoing transplantation.

Keep reading: Scoliosis in Children: Everything You Need To Know

How is it contracted?

Mononucleosis is also known as the kissing disease, or mono. Although a kiss can be a route of contagion, it’s not always transmitted in this way. Like other viral diseases, it’s spread through saliva.

This means that coughing, sneezing, and, in general, close contact, facilitate transmission. Objects that contain saliva can also spread it. Children tend to share straws, water bottles, and food, which is a risk factor.

Mononucleosis is caused, in 90% of cases, by the Epstein-Barr virus. Cytomegalovirus causes 7% of infections. The origin, in the remaining percentage, is Toxoplasma gondii.

The Epstein-Barr virus (EBV) belongs to the same family as herpes, and, as is often the case with this type of microorganism, it can remain in the body for a long time in a dormant state, without causing any symptoms. However, an asymptomatic person can spread the disease.

Symptoms of mononucleosis in children

It’s very rare for a young child to show symptoms of the disease, or for them to be severe. If there are any, the most common are the following:

On some occasions, these symptoms may be accompanied by others such as chills, headache, swollen eyelids, inflammation of the liver and spleen. In the long term, anemia is a more symptomatic complication that can come from the infection.

Mononucleosis in children can lead to very severe complications, but this is rare. It can cause meningitis, Guillain-Barré syndrome, myocarditis, thrombocytopenia, and orchitis. On very rare occasions it causes liver failure.

You may also be interested in: How the Immune System Fights Cancer

What to do before the diagnosis?

There are no specific vaccines or medications to treat mononucleosis. Therefore, the treatment focuses on alleviating the symptoms.

Typically, the disease resolves itself in three to four weeks. Some symptoms such as fatigue and fever may linger for another week.

The doctor will indicate which drugs the child should take. They usually use analgesics and anti-inflammatories. If complications arise, they may also prescribe corticosteroids, depending on the case.

The best thing is to keep your child separate from other people, and make sure they drink plenty of water and rest, especially in the acute phase of the disease. They should avoid contact sports and physical activity for at least three weeks.