Mental Illness in Children and Its Symptoms

The symptoms of mental illness in children aren't easy to recognize. In fact, there are times when we might believe that a certain behavior is either temporary or that they're just acting out. If you have any questions, consult a therapist. 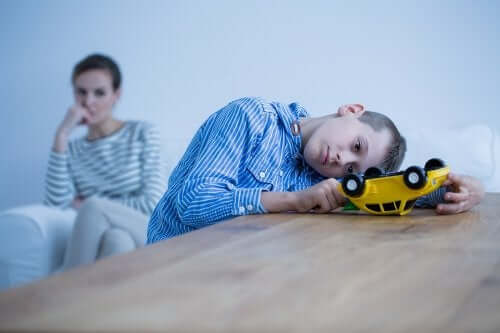 Mental illness and other disorders don’t just affect adults, but also children. In fact, it’s even present in many animal species. However, the symptoms may present themselves differently in children. Are you able to recognize mental illness in your child?

Today, we’ve compiled some information that will allow you to learn more about the subject of mental illness in children. Read it so you have an idea of how to identify the symptoms if they become present in your child.

What You Should Know About Mental Illness in Children

While the detection of mental illness in adults isn’t complicated, we can’t say the same about diagnosing children. In fact, children usually present certain symptoms that may go unnoticed by the adults in charge of them. Unfortunately, valuable time is often lost before beginning treatment.

Also, keep in mind that children are still building up vocabulary. Therefore, their ability to express what they feel is still limited.

So, the adults in charge must know enough about how mental illnesses manifest in children so you can detect it and get treatment as soon as possible.

Below, we’ll tell you in detail what the most frequent mental disorders in children are, together with their general symptoms.

The Most Common Mental Disorders in Children

Children can have the same mental illnesses as adults.

However, certain disorders are more common in children. For example:

The Symptoms of Mental Illness in Children

As explained above, mental disorders in children often go unnoticed by parents. In fact, you may think the initial symptoms are normal and they’re just part of common child behavior. If so, then you won’t take them as a sign that something is off.

In any case, if a specific sign is present over a long period or becomes more intense, seek advice from a therapist. It might be an indication that your child needs some extra help.

Parents often lack adequate information to detect symptoms of mental illness in their children. It’s for this reason that they may not seek help. Unfortunately, most of us are influenced by the negativity and stigmatization of mental illnesses in our society. That said, the first step is to leave behind any taboos and prejudices you may have regarding mental illness. That way, you can inspire confidence in them and help end the (unnecessary) social stigma, at least at home.

So, what symptoms should you be on the lookout for?

Look out for drastic and radical changes in your child’s behavior. For example, they may begin to act irritable and violent or adopt dangerous and aggressive behavior. Also, they may issue threats or argue and quarrel constantly.

What you’ll be looking for here are displays of unusual and disproportionate irritability and aggressiveness. These may indicate the existence of some type of mental disorder.

Also, consider any notable changes in your child’s behavior as a warning sign of mental illness, especially if they last a long time or are intense.

When we say: “Watch out for symptoms,” we mean watch out for important changes that affect a child’s daily life.

Thus, for example, pay special attention if a feeling of sadness lasts more than fifteen days or if the child is isolated and self-absorbed in general. (However, also keep in mind that some children are more introverted than others.)

For example, notice if new behavior prevents them from doing activities they used to enjoy or if it influences their school performance. If so, then you may have a case of mental disorder, like childhood depression.

It’s normal for children to have difficulty concentrating, especially if they have to sit for long periods in a boring classroom.

However, if this difficulty is disproportionate when compared to that of other children or if it affects their daily life and school performance or at least two areas of their life (school, at home, etc.), it may be a symptom of a mental disorder.

In particular, pay attention to other possible symptoms such as memory loss or alterations in it like difficulty thinking clearly.

Look out for excessive weight loss, vomiting or loss of appetite, as it may indicate an eating disorder.

It’s important to be alert and seek help in these cases, so treatment can begin as soon as possible. Indeed, anorexia and bulimia will lead to serious negative consequences if they’re not treated.

5. Mental illness in children may reflect as self-harm

In many cases, mental illness can lead to self-harm in a child. So, you must be on the lookout for any injuries in a child’s body, as they may be self-inflicted.

You must seek immediate help if you notice this symptom. In fact, many children with mental illness also have suicidal thoughts, so the sooner you detect it, the sooner they can begin treatment.

Be aware of any noticeable changes in the behavior of your children. Know that self-harm, suicidal thoughts, and difficulty concentrating are a sure indicator that they should see a therapist for support.

It’s normal for children and adolescents to experience feelings rather intensely. However, if there’s no particular reason for it but – let’s say, your child has an excessive, powerful, irrational fear of something – then the phobia might be a symptom of a mental disorder.

Here, we refer to phobias or fears that negatively interfere with their daily activities. In these cases, the intensity of the fear is out of the ordinary.

While adults tend to display symptoms such as anxiety or sadness, children may express a mental disorder in other ways. For example, unusual or constant headaches or stomachaches could be a symptom of anxiety or worry.

Likewise, you must also be aware of any possible sleeping disorders that have no apparent explanation. In any case, your first step must be to rule out any physical problems that could be causing pain or difficulty sleeping.

This is particularly concerning during adolescence. A troubled child often relies on substances such as alcohol or drugs as a way of “facing” or “avoiding” their painful reality.

It’s for that reason that you must be aware of any signs of drug use on their part.

We recommend you read: Signs of Attention Deficit Disorder in Children

The child might express that he sees or hears people or things that don’t exist. However, be careful with this, because a child’s imagination is unlimited. D

However, if this symptom continues for many years into adolescence or if it impacts their quality of life, seek help.

Many children are shy, and that’s normal. However, extreme withdrawal may be due to a mental disorder that prevents them from interacting with their environment.

Similarly, pay attention to whether their difficulty in relating to others is excessive and they refuse any contact with other children or other people. This may be a sign of an anxiety disorder or social phobia.

What to Do if You Detect Mental Illness in Your Child

Psychological help is key in coping with mental disorders that affect children. So, it’s essential to seek help after recognizing certain symptoms.

It’s important to detect some of these symptoms as well as the intensity and duration that we have described it is essential to seek help. It’s best to speak with a doctor and discuss your concerns with them. Likewise, you should also talk to the child’s teacher, as they may be able to tell you if the symptoms happen during school or if they display any others.

If confirmed, the child can begin an effective psychological treatment depending on the illness. Of course, they must always have the unconditional support and love of their family. That way, they know they’re not alone, that their discomfort has a solution, and that you’ll always be there to give them your full support.

Mental Illness: Ten Warning Symptoms
Certain disorders related to behavior, mood or to the ability to relate to others are indicative of a possible presence of mental illness. These type of symptoms should be treated as soon as possible. Read more »
Link copied!
Interesting Articles
Children
8 Crafts to Decorate a Children's Party