Meckel's Diverticulum and its Characteristics

Approximately only 2% of patients with Meckel's diverticulum present complications. The vast majority of those affected by this issue remain asymptomatic throughout their lives. In this article, discover all about it! 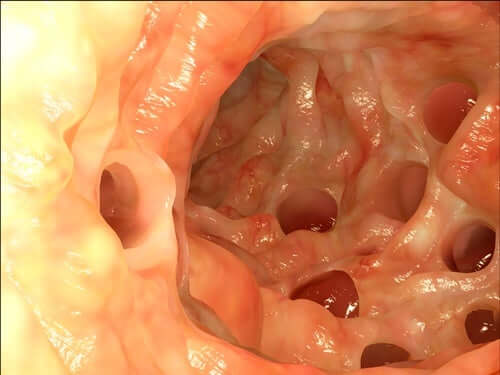 Meckel’s diverticulum is a gastrointestinal tract birth defect. It’s caused by an embryological development alteration during the period between the fifth and seventh week of gestation.

The incidence of this problem is between 0.3% and 3%. On average, only 2% of the population has Meckel’s diverticulum, but the symptoms manifest in around 5% to 7% of patients. Therefore, most cases are asymptomatic.

This problem was first described by Johann Friedrich Meckel in 1809. It has the same incidence in men and women. However, complications are three to four times more common in men. It’s most frequently diagnosed in children than adults.

Meckel’s diverticulum is a small bulge that develops in some people’s small intestine. During embryonic development, the foregut communicates with the yolk sac through a channel called the vitelline duct.

As the embryo develops, both the yolk sac and the foregut disappear. However, a residue of the vitelline duct remains in a small percentage of the population.

Sometimes, a Meckel’s diverticulum also has a small duct. It’s the omphalomesenteric duct, a fibrous cord that connects the diverticulum and the navel.

Meckel’s diverticulum is made up of the same three layers that make up the small intestine. These are mucosa, submucosa, and muscularis propria. It’s a real diverticulum if it has three layers, since false diverticula have only the first two layers.

It lies in the antimesenteric border of the ileum and usually has a length of between two to four inches. It can reach a diameter of one inch. Usually, it receives irrigation from a remnant of the vitelline artery or the superior mesenteric artery.

It’s common for it to manifest remains of ectopic, colon, pancreatic, and duodenal gastric mucosa, hepatobiliary tissue and also Brunner’s glands. It’s also common for it to have an endometrial tissue at the tip.

Meckel’s diverticulum can cause complications, usually during the early years of childhood. 60% manifest before age ten, however, symptomatic individuals have a 4% to 6% risk of complications.

Bleeding is the most common complication. Usually, experts usually associate it with peptic ulcer disease of the gastric mucosa. Generally, it manifests at age two and its symptoms are painless blood stools. Another common complication is also abdominal pain.

Read on to learn more: Foods to Avoid If You Have Diverticulosis

Meckel’s diverticulum is difficult to diagnose because it has similar symptoms to many other diseases. Thus, it’s common for medical professionals to request tests to confirm the diagnosis, such as a colonoscopy, abdominal technetium scan, or wireless capsule endoscopy.

If there’s bleeding or bowel obstruction, then surgery may be performed to remove the diverticulum. The surgery permits the specialist to remove it, along with the intestinal areas surrounding it. This is done by traditional or laparoscopic surgery.

Surgery as a treatment for Meckel’s diverticulum is very safe and only rarely presents complications. Most patients recover completely after surgery and never suffer from this problem again.

Some Treatments for Diverticulitis
Diverticulitis is a disease that you should be very careful with. Carrying out a diet rich in fiber and drinking enough water is part of the treatment. Read this article to learn about these treatments for diverticulitis. Read more »
Link copied!
Interesting Articles
Illnesses
Do You Know about the Genetic Basis of Cancer?