The Relationship Between Eating Meat and Breast Cancer

According to a study, eating meat and breast cancer are related. The women interviewed who ate meat regularly were more likely to not recover from breast cancer. 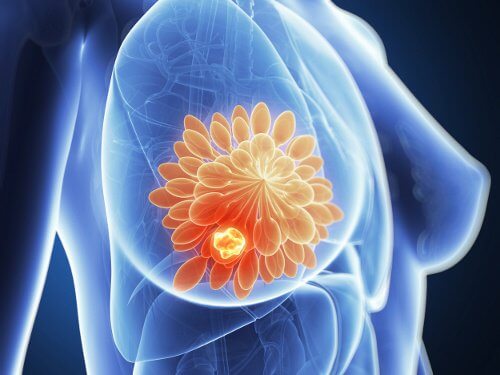 Women who eat a lot of roasted, smoked, or grilled meats are at a higher risk of developing breast cancer than those who consume less of these products. Of the different cooking methods, smoking seems to be the most harmful. Today we’ll look at the link between eating meat and breast cancer.

Excessive consumption of smoked pork and lamb is associated with a 17% higher chance of mortality from any cause. In the case of breast cancer, this value goes up to 23%.

There are many active carcinogenic compounds found in grilled or smoked meats, formed during the process of organic material combustion. As a result, women who eat these products may be exposed to carcinogens. These carcinogens are similar to those found in cigarette smoke or air pollution.

Carcinogens and other related factors are associated with an increased risk of developing breast cancer.

Before now, many studies had already linked meat and breast cancer. This especially included meats cooked at higher temperatures, because these tend to cause an increased risk of breast cancer.

The research didn’t indicate whether the consumption of these meats could affect a patient’s survival rate after a tumor appeared, however.

The Relationship Between Eating Meat and Breast Cancer

Prior research focused on the fact that exposure to certain chemicals in grilled or smoked meats could increase one’s risk of breast cancer.

In more recent studies, 1508 women who had been diagnosed with breast cancer were interviewed.

Between 1996 and 1996, these women gave interviews about their eating habits. Additionally, researchers repeated this same questionnaire repeated five years later, between 2001 and 2002.

A follow-up study of half of the women after at least 17.6 years found that there had been a total of 597 deaths. 237 of these deaths were directly related to cancer.

The latter group had a 31% higher risk of mortality, during the study period.

Lower Risk With Poultry and Fish

Another important finding was that women who preferred to consume poultry and fish were more likely to survive breast cancer. This figure was 45% higher than that of women who ate other kinds of meat instead of fish and poultry.

What could be the difference? Chicken, turkey, and fish have much lower levels of saturated fats than red meat. Therefore, it’s clear that there’s a relationship between red meat and breast cancer.

Another possible explanation for this difference is the fact that chicken and fish may have a protective effect.

In the case of chicken and turkey, these are “white” meats. As a result, they contain proteins that are less aggressive on the body compared with red meats.

When there is early detection of cancer, there are better treatment options. Therefore, the number of women who survive breast cancer is increasing.

In Spain, around 26,000 cases of breast cancer are diagnosed every year. This amounts to almost 30% of all cancers suffered by women.

Most cases are diagnosed between the ages of 35 and 80. The highest rates of diagnosis are between 45 and 65.

Follow-up care for this cancer varies according to its type.

It’s normal to have follow-up visits every three to four months for the first two to three years after treatment, and once or twice a year after that.

At your follow-up visits, your doctor will order certain exams to look for recurrences or to detect other types of cancer.

It’s important that your doctor help you determine what follow-up care plan is the most appropriate for your particular case.

Each patient should clarify all of their questions, problems, or uncertainties related to their follow-up plan with their doctor.

For other types of clinical care, patients can continue to see their general practitioner and other specialists.

7 Early Signs of Bowel Cancer You Shouldn’t Ignore
While it's true that these bowel cancer symptoms may be common in other conditions, it's advisable to go to a specialist if you have two or more of them. Read more »
Link copied!
Interesting Articles
Did you know?
World Blood Donor Day Helps Save Lives