The most common cause of mastalgia is the hormonal change that precedes menstruation. However, it's important to rule out other diseases. 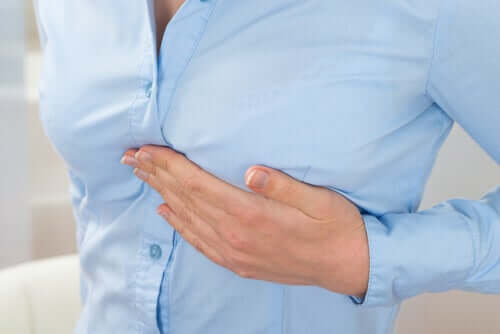 Mastalgia is a medical term that refers to breast pain. It’s very common in women, especially those of reproductive age who haven’t yet reached menopause.

There may be many types of this kind of pain due to various reasons. Around 70% of women say they’ve experienced it at some point throughout their lives. Yes, it can be rather bothersome, but the truth is the vast majority of cases have something to do with menstruation. Thus, they seldom indicate there’s a serious disease.

However, there are times when mastalgia is also a symptom of certain diseases. In fact, breast cancer could be a reason, even though it’s rare. Due to its heterogeneity, in this article, we’ll explain the most frequent causes of mastalgia. It’s important to know what they are to determine if you should see a doctor.

What are the most likely causes of mastalgia?

First, it’s important to note that mastalgia is usually caused due to hormonal activity. During a woman’s menstrual cycle, the hormonal levels of estrogen and progesterone vary in certain phases.

After ovulation, the hormones remain elevated until the days before menstruation. Their function is to stimulate the ducts of the mammary gland to enlarge them. Similarly, the breasts begin to retain fluid. Thus, the result is an increase in size that can lead to pain.

Mastalgia is cyclic in such cases. Thus, breast pain follows a pattern that’s according to the menstrual cycle. It increases just before menstruation. Some women may even experience it from the moment they begin to ovulate.

Also, this kind of pain has certain characteristics. It usually affects the entire chest and sensitivity in this area markedly increases. Some women experience problems when they put on a bra or might feel the pain extending to their armpits.

Hormonal contraceptives are the most common treatment for mastalgia due to cyclic hormonal changes. According to some studies, these medications help reduce this kind of pain, although it may linger or appear as a side effect in some cases.

When mastalgia neither follows patterns nor can be associated with hormonal changes, then it’s important to explore other possible causes. To begin with, you must rule out that your pain is the result of some kind of blow.

Similarly, talk to your doctor about any medications you might be taking. This is because many drugs can lead to pain in this area as a side effect, especially certain antidepressants and hormonal therapies.

A previous breast surgery, even if it was a long time ago, can also lead to mastalgia. It’s relatively common because some nerves are often injured during surgical intervention, and scarring can also cause this problem.

Maybe you like it: Is It Possible to Prevent Breast Cancer?

These are small bags filled with fluid that form inside the breasts. However, it’s a benign and fairly common situation that doesn’t require treatment unless it causes discomfort. These can appear at any age, although they’re more frequent after menopause.

Breast cancer is one of the most common types of cancer in women. However, it’s very rare for it to manifest through mastalgia. In any case, it’s important to rule out the cause. Thus, doctors should use diagnostic techniques such as mammography.

How do doctors diagnose the cause of mastalgia?

To correctly diagnose its causes, a patient must give as much information as they can to their doctor about their symptoms. You must be aware of the affected area. For instance, if your entire chest hurts or only part of it. Similarly, you must know when the pain comes and goes.

Also, a doctor can help with certain complementary tests for diagnosis. The most commonly used tests are via mammography and ultrasound. In some cases, they may collect a biopsy to determine the nature of the pathology.

Mastalgia is a common discomfort that almost all women experience at some point in their lives. Generally, it’s due to hormonal changes. However, it’s important to consult your doctor so they can clear any doubts you might have and to either rule out a disease or properly diagnose it.

Treatments Options Against Breast Cysts
Although breast cysts don't tend to be dangerous, it's a good idea to talk to your gynecologist so they can examine you and make a diagnosis. Read more »
Link copied!
Interesting Articles
Illnesses
Can Celiac Disease Cause Infertility?