All donations are important and as fate would have it, his daughter was carrying the virus and he was able to save his grandson. 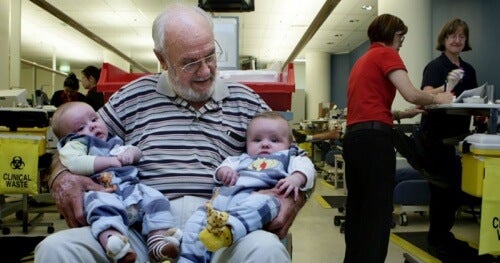 This is one of those positive stories, full of hope, that we love to share with you. Our hero is James Harrison, a 78-year-old from Australia. He’s better known as “the man with the golden arm”, as he’s saved millions of babies from something known as Rhesus disease.

He lives a normal life in Australia, enjoying his daughter, his grandchildren, and the peacefulness of old age. Some people might not call him a hero. However, thanks to the very special contents of his blood, two million people are still alive.

Learn more about this incredible story with us.

When James Harrison was only 14, something happened which placed the young teenager on the brink of death. After an accident, doctors were forced to remove a lung.

He spent several weeks in intensive care and received a number of transfusions. His mother explained to him that they had to use around 26 pints of blood in order to keep him alive.

He was strongly impacted by the fact that a bunch of people he didn’t even know voluntarily donated their blood to save his life, As a result, young James decided that the first thing he would do when he turned 18 was to donate blood.

And so he did. But the last thing he thought would happen is that the day after his first donation he would get a call from the hospital asking him to come immediately…

What is Rhesus disease?

In the mid-1960s, the infant mortality and miscarriage rate was really high in Australia. The National Service of the Red Cross has told us just how terrible it was.

Many women would miscarry or lose their babies, but no one knew the cause. In other cases, children were born with serious deformities that caused them to die within a few days. What was causing it?

It was Rhesus disease. If you’ve never heard of it before, it’s a really devastating disease. The mother’s immune system recognizes the cells of the unborn fetus as an enemy and attacks to defend the mother’s body. Hence the miscarriages and deformities.

This is due to the fact that the blood of the pregnant woman can contain the dreaded Rhesus negative (Rh-) factor. That’s compounded even further by the fact that the father can transmit the Rhesus-positive (Rh+) factor to the baby.

Rhesus disease is lethal to the baby and severely impacts the mother psychologically, thinking that her own antibodies attacked the fetus. However, thanks to James Harrison, this all radically changed.

With his first donation of blood, doctors realized that James was really special:

A gift in James Harrison’s blood

According to figures from the Red Cross, James’ blood has saved the lives of millions of babies. Two million infants that were born without any complications and living normal lives.

Even though James is happy to have offered hope to all these children, he cannot deny that the most satisfaction he got from giving that special donation was the fact that it was, amazingly, able to save his own grandson’s life.

Through life’s strange coincidences, his own daughter was a carrier of the Rhesus negative factor, so his grandson has many reasons to be thankful for his grandfather.

Now, you may be wondering why James Harrison has this antibody. Is it fate? Is it genetic?

According to experts, the reasons lies in the accident he suffered when he was 14.

They think that the treatment he received and the fact that he received numerous donations from different people caused him to spontaneously develop this antibody.

However, doctors cannot be sure. We thank James for continuing to do his job, even though, as he says, his fear of needles causes him to look away every time he donates blood.

At this point, you might wonder, “What will happen when James is no longer with us?”

According to doctors, more people should exist with this antibody. We’re just waiting another donor with similar characteristics to come forward. Another anonymous hero with a “golden arm” who unknowingly carries a source of life in his blood.

The Myths and Truth about Blood Donation
%%excerpt%% Many people shy away from blood donation due to the large number of myths around this practice. However, it can really save lives. Read more »
Link copied!
Interesting Articles
Did you know?
New Year's Traditions Around the World