The ink used in these tattoos is not toxic and it is washable. But the confidence and strength that it gives these sick children will last much longer. 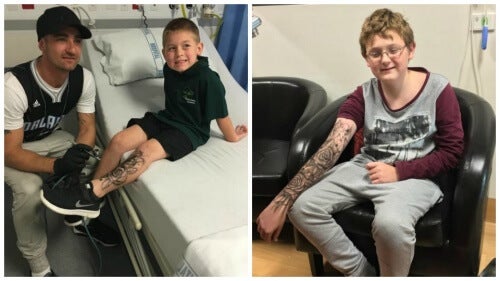 These tattoos don’t hurt when they’re applied to the skin. Also, they wash down the drain when these kids take showers, but they become ingrained in their spirits to give them strength. As soon as they’re etched on their skin, these sick children become “hard kids”, they smile at life and enjoy seeing life through another lens in an original, bold and spectacular way.

It’s all worth it if it leads to a smile from a sick child, and this New Zealand artist realizes this.

For Benjamin Lloyd, this young tattoo artist’s story is nothing short of an example of personal achievement.

When he was a child he was seriously burnt, which left part of his arm deformed.  This made his school years nothing but hell.

Most of his classmates made fun of him for his “deformed and wrinkled” arm.  It was something that marked his childhood and part of his adolescence. However, once he was old enough and he had the opportunity, he didn’t hesitate to put a tattoo over it.

His life changed overnight.  With a simple drawing all his strength, confidence and motivation suddenly grew so full that he instantly found his purpose in life: to give tattoos.

Creating designs on other people’s skin, to see in others the same transformation that he himself experienced.

Death comes at times in our lives when we sometimes least expect it. A few years ago, he had to face the death of his stepson. The boy was just 7 years old.

The idea of going to hospitals to give tattoos to sick children crossed his mind right then and there.

At the time, he had his doubts. He didn’t know if it would be well accepted, because generally, there are some people who even today, still view tattoos negatively.

However, he knew well that something as simple as painting a tattoo on a child’s arm was enough to bring them happiness and hope.

A Challenge to Social Networks

To figure out whether people would accept the image of a child with a tattoo, he did a test. He tattooed the children in his neighborhood and put the images up on Facebook.

He said that if he got 500 likes, he would go to the hospital and do the same with sick children suffering from cancer if they want one.

The next day he was completely shocked to see that he had more than 400,000 likes.

It was clear, he had to do it. So, Benjamin Lloyd created a type of special airbrush to create tattoos in just over 9 minutes.

It uses a non-toxic ink that quickly washes away. He uses certain stencils that the sick children choose themselves, and the results are both amazing and emotional.

The photos of these tattooed children have gone viral. From then on, Benjamin Lloyd has not stopped visiting hospitals to give away these fun art sessions with his airbrush.

The families are very thankful because any activity outside of the norm in a hospital is a great blessing in itself. This is especially true for these children that are undergoing clinical routines and long hours under IV drops and monitors.

Doctors have certified that the ink does not produce any sort of toxic effect. The only effect it creates is smiles and a heightened sense of confidence.

Benjamin gives them his necklace while he’s tattooing them and he talks about the several kids that have made it out ahead in their fight against cancer.

This young artist brings hope, strength, and courage. When the children look in the mirror and see their skin painted with roses, skulls and fantastical creatures hugging their bodies, they feel protected by a shield of energy and strength.

It’s spectacular. Just as the parents said, the problem now is they don’t want to take a bath!

A Father Gets a Tattoo of His Son’s Cancer Surgery Scar
After his operation Gabriel was left with a cancer surgery scar on his head that took away all his joy and desire to leave the house. Read more »
Link copied!
Interesting Articles
Did you know?
New Year's Traditions Around the World