Learn How to Make Bread Without Kneading or Using Gluten

Making bread without kneading it or using gluten is simpler than it seems and it's worth it. The result is healthy and delicious. 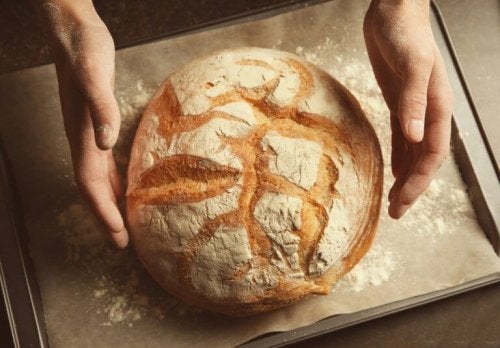 Bread without kneading is great for homemade recipes. After all, this bread doesn’t require much effort, and it doesn’t require a long list of ingredients or a special type of oven.

The secret to the recipe that we’re going to show you lies in the time the dough is at rest and the baking. The rest is eating it!

What also stands out is that you can add other ingredients to enrich the flavor. In general, this could be seeds and dried fruit, and even cinnamon.

Read: Do You Know What Happens in Your Body When You Eat Salt? Be careful!

After the designated time, check to see if the bread is done. If not, put it back in the oven for another 10 minutes. During this time, keep an eye on the bread to make sure that the crust isn’t burning.

Take out the bread  and allow it to cool to room temperature. Then, remove the bread from the pan and place on a clean dry tea towel.

This bread has a very soft texture and is considerably light. It will look very nice with a golden crust and medium thickness. It will be rather course inside due to the mix of ingredients and the baking process.

Xanthan gum is the ingredient that’s mostly used in homemade bread without gluten since it produces elasticity and structure.

What is xantham gum?

It’s a polymeric product, which means that it’s a result of the action of a bacteria in the fermentation process of sugar.

Another substitute is amaranth flour. In fact, it’s the number one flour that people use in foods for those with celiac disease.

However, to make bread, it must be mixed with another type of flour to enable it to rise.

Two Recipes for Gluten-Free Churros
Do you like churros but are gluten sensitive or intolerant? Then we've got some recipes for you! Try these delcious gluten-free churros. Read more »
Link copied!
Interesting Articles
Healthy recipes
Two Ways to Make Healthy Rice

Rice is one of the most basic foods. Known and used throughout the world, it’s also one of the most versatile ingredients, capable of going well with almost everything. In…

Vegetarian and vegan
How to Make Quinoa and Garbanzo Meatballs

Are you looking for ways to substitute meat in your recipes? Do you want to enjoy more nutritional and satisfying…

Appetizers and main courses
How to Make Argentina Stuffed Milanesa

Milanesa is a typical Argentine dish and is particularly popular among the youngest of eaters. And if you serve it…

Vegetarian and vegan
How to Make Rice Stuffed Artichokes

Rice stuffed artichokes are a perfect dinner option. Take advantage of the wonderful benefits of artichokes to dazzle your entire…