Lung Cancer in Women is Much More Deadly

Lung cancer isn't a disease that affects more men than women. Do you want to know more? Keep reading! 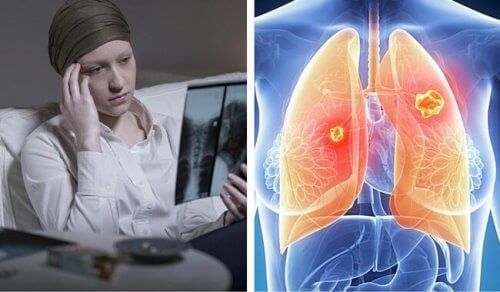 Lung cancer is a disease that’s been more commonly associated with men than women. However, with the passage of time, experts have been able to observe that this isn’t necessarily the case.

According to the Spanish Lung Cancer Group (GECP), in the last twenty years, the number of cases of female patients with this type of cancer has greatly increased. Let’s see more about this topic below.

It isn’t more common in men

While many people may not be aware of it, lung cancer is the most common cause of death from disease in both men and women. However, many tend to associate it more with men, due to the ignorance of the increase in the number of smokers in the female population.

Statistics show that women who have been smoking for more than 10 years have a greater than 50% risk of developing this disease. In addition to that, the lungs deteriorate prematurely, exposing you to other serious respiratory disorders.

For this reason, currently, contrary to what’s usually believed, there are those who believe that lung cancer could be more deadly than breast or uterine cancer in women.

A report produced by the American Cancer Society and the International Agency for Research on Cancer (IARC) found that in developed countries, lung cancer is the most deadly form of cancer among women. The authors agreed that an increase in smoking habits is mainly responsible for these findings.

“The tobacco epidemic,” as professionals prefer to call it, has spread significantly among consumers where women even have begun to outnumber men.

It’s estimated that around 80% of lung cancer diagnoses in women are due to smoking cigarettes. The rest is derived from other lung conditions, exposure to toxins, and genetic issues.

How does lung cancer in women develop?

Your lungs are your respiratory organs that are responsible for supplying oxygen to the rest of the body and expelling carbon dioxide. Cancer develops when something stimulates the overgrowth of cells.

If cancer is not diagnosed in a timely manner, these cells can infiltrate other bodily organs and tissues through a process known as metastasis.

One of the reasons that this type of cancer is so deadly is because its initial symptoms are almost always difficult to identify. At first, it may seem like a common respiratory infection. Patients disguise it using over-the-counter treatments.

The signs become more clear once the disease has become complicated. However, some patients still present with subtle symptoms that doctors even misinterpret.

The most troubling fact is that the longer screening is delayed, the more likely it is that lung cancer will develop into an incurable condition. That’s why it’s essential to know what your symptoms are:

Symptoms of lung cancer in women can vary depending on the patient’s body and the severity of the disease. In fact, some people don’t have any symptoms at all. In addition, they receive their diagnosis through a chest x-ray performed for other reasons.

See also: Tips to Face the News about Cancer

How to prevent lung cancer

Although cancer (of any type) is a disease that can’t always be prevented by a single method, it’s possible to reduce the risk of developing it by practicing good lifestyle habits.

The best way to prevent lung cancer is to stop smoking. After 10 to 15 years, a person who quit smoking will achieve the same risk level as a non-smoker.

Having a diet that’s rich in antioxidants, vitamins, and minerals – as well as doing regular physical activity – are other good practices to help you avoid lung cancer.

Cancer in Women: The 5 Most Common Types
Learn about the five most common types of cancer in women in this article today. Take three minutes of your time to read this because prevention is vital. Read more »
Link copied!
Interesting Articles
Illnesses
What Are Autoinflammatory Diseases?