Low-carb diets have become one of the most commonly used nutritional strategies. However, it’s important to consider the intellectual and emotional effects of these diets. Discover them here! 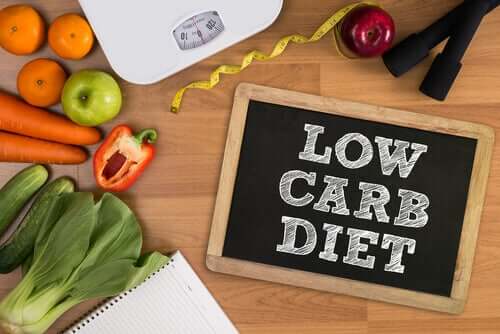 The physical benefits of diets low in carbohydrates, also known as low-carb diets, are quite well-known to everyone interested in nutrition applied to weight loss. However,  do you know how they impact you at a cognitive and emotional level? Are they really sustainable in the long term?

The body can indeed get glucose from any macronutrient: carbohydrates, fats, or proteins. However, when it doesn’t use carbohydrates, the efficiency it does it with is much lower, and this could have negative consequences on brain functioning.

“Low-carb” diets refer to diets in which a person gets less than 30% of their total energy from foods rich in carbohydrates. In recent years, they’ve become the most widely-used nutritional strategy for losing body fat. The reason for its widespread use against obesity lies in the importance of the role of carbohydrates in body fat accumulation. However, there are other solutions that, instead of banning them, seek to moderate their intake and adjust their glycemic index.

Although the human brain only represents 2% of the body’s total weight, it uses 20-30% of the energy you consume daily. Thus, it’s a very demanding organ that, due to its greater energy efficiency, uses carbohydrates as its main source of energy.

The brain is the human body’s most demanding organ as a result of its complexity.

Because of this, several studies have concluded that low-carb diets negatively impact the performance of cognitive tasks related to learning, attention, and memory. However, it seems that this only happens in the short term. Nevertheless, it’s also true that not many people can follow them for long.

In the long run, when not eating carbohydrates becomes a lifestyle, it seems that several adaptations occur that make energy production from amino acids, the structural unit of proteins, and fatty acids more efficient. Thus, most long-term studies haven’t seen impaired cognitive function.

On the other hand, when we talk about people with pre-existing cognitive impairment, it seems that low-carb diets may beneficial. This is because the brains of Alzheimer’s patients lose their ability to use glucose as an energy source, which makes cognitive detriment even greater. However, at least during the early stages of the disease, the patient’s brain can use ketone bodies for energy, substances that derive from the mobilization and breakdown of fatty acids.

Thus, it seems that low-carb diets improve the cognitive functioning of those with mild impairment. The results of a preliminary clinical trial published by the Journal of Alzheimer’s Disease in April 2019 show this. However, these dietary guidelines are difficult to sustain over time.

What happens on an emotional level?

In this case, the opposite occurs. Low-carb diets don’t negatively impact the emotional state in the short term, they do in the long-term. This results in reduced serotonin levels in the brain.

While carbohydrates increase serotonin levels in the brain, proteins and fats reduce them.

This may translate into reduced energy levels, sugar cravings, feelings of sadness or even depression.

Finally, it’s important to note that people find it hard to adhere to low-carb diets. This is due to several reasons:

Thus, except in exceptional cases and regardless of their theoretical physical benefits, it seems that low-carb diets aren’t healthy alternatives. They reduce short-term intellectual performance, negatively impact the emotional state, and are hard to follow. Therefore, it’s a good idea to stay away from restrictive diets and eat healthily. Also, remember that, regardless of the benefits you could get from it, the best “diet” is one you can easily follow.

The 7 Best Carbohydrates for Weight Loss
Despite what you may think, carbohydrates can be very good for you, providing your body with energy. These are the 7 best carbohydrates! Read more »
Link copied!
Interesting Articles
Nutrition
Do We Need to Consume Sugar? Find Out the Truth