Loss of Consciousness: Why it Happens

Loss of consciousness is a relatively common clinical picture. Its causes can be simple or life-threatening. In this article, we’ll explain why it can happen in detail. 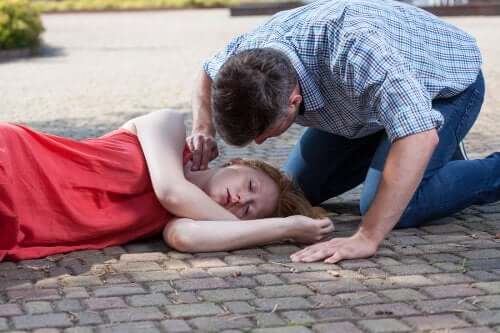 The basic mechanism that’s common to all causes of loss of consciousness is the lack of proper brain irrigation. This means your brain doesn’t get enough blood for a moment, causing a disconnect with reality. Afterward, the person typically recovers spontaneously. Spontaneous recovery occurs because, when the person falls, the horizontal position favors the arrival of blood to the brain.

Fainting is relatively common. It’s estimated that three percent of emergency consultations are because of it. Its causes may be low-risk or dangerous. Below, we’ll explain them dividing them into two different categories:  non-cardiac loss of conscious and cardiac-related loss of consciousness.

Non-cardiac causes of loss of consciousness

This is the most common cause. Vasovagal reflex is an involuntary nervous system response to a given stimulus, which causes immediate vasodilation, drop in blood pressure, and redistribution of blood to the lower limbs. Sometimes, it’s also caused by a stressful situation, as well as intense body aches, dehydration, and extreme temperatures.

When you quickly change from a horizontal to a vertical position, without giving the body enough time to activate compensation mechanisms, you may suffer from hypotension. This means that your blood pressure drops, leading to deficient brain irrigation.

Migraines that cause loss of consciousness

Intense migraine-type headaches can be accompanied by symptoms known as auras. One of the migraine auras is the loss of unconsciousness, which is usually temporary.

Strokes and loss of consciousness

This is the most serious and life-threatening non-cardiac cause. A stroke or cerebrovascular accident (CVA) can be ischemic, due to a blockage in the arteries, or hemorrhagic, due to a ruptured brain vessel. If you think you or someone else may be suffering from the symptoms of a stroke, seek medical attention immediately.

A headache may be the initial symptom prior to loss of consciousness.

Keep reading: Nine Foods that May Help Reduce Your Risk of Thrombosis and Stroke

Cardiac causes of loss of consciousness

Arrhythmias are conditions where the heart beats irregularly and abnormally. Given these irregular heartbeats, not enough blood reaches the brain for a short or long time. Thus, the patient may faint.

The aorta is the body’s main artery, responsible for distributing the blood of the heart to the rest of the human body. If this artery has a problem, it can decrease the blood flow to the body. As the brain is above the level of the heart, it requires good blood pressure for proper irrigation. The first symptom of diseases such as aortic dissection or aortic aneurysms is often a loss of consciousness.

These conditions affect the heart muscle. A common situation is for the left ventricle, which is responsible for pumping blood into the aorta for distribution, to enlarge. In these cases, the same mechanism as the one we described in aortic problems can occur.

The internal cavities of the heart communicate with each other through valves that allow the blood to flow in one direction, without backflow. Sometimes, these valves are deficient or are more closed than they should be. When they don’t do their job, not enough blood reaches the brain.

Heart disease can manifest with this symptom.

Keep discovering in this article: What You Should Eat if You Suffered a Heart Attack

What to do after a loss of consciousness?

When in doubt, it’s important to consult with a medical professional to get the necessary additional tests. Generally, the consultation occurs some time after the patient suffered the incident when they’re recovered.

However, if the loss of consciousness is sudden with no immediate explanation and the person doesn’t recover, you should call emergency services. This may be a sign of a stroke or heart failure.

First Aid: How to Respond During a Cardiac Emergency
Knowing how to respond to a cardiac emergency while waiting for medical help, whether it's a myocardial infarction or sudden cardiac arrest, can be the deciding factor in how it ends. Read more »
Link copied!
Interesting Articles
Illnesses
What Are Autoinflammatory Diseases?