One of the most worrisome and recurrent illnesses of this century is cancer. The number of people suffering from this disease has noticeably increased in the last few decades, which is why a large amount of scientific studies are being done worldwide that focus on discovering the causes of its appearance and the best way to cure and eliminate it. 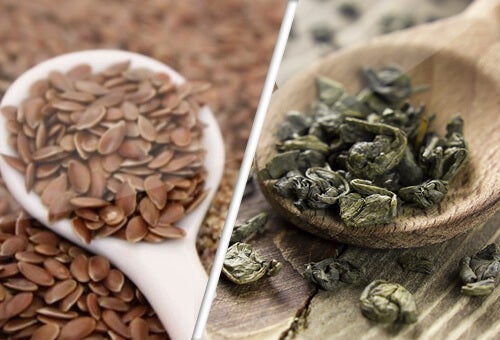 Today we want to talk about the potential benefits of linseed and green tea in the fight against cancer.

There are a lot of different types of cancer and even though the speed at which it develops depends on each person’s body, it’s usually fatal if you don’t discover it on time and treat it properly.

There are three primary ways of treating this condition: surgery, chemotherapy, and radiation therapy. However, advancements in science and different studies have shown other less invasive methods that could alleviate the pains caused by cancer and contribute to its cure.

The causes that lead to the appearance of cancer are still unclear. But experts believe it results from several combined factors: environmental, genetic, physiological, and dietary.

A lot of scientists agree that a diet rich in beneficial foods could play a crucial role in the prevention of cancer. Therefore, we’re going to talk about two foods that may have potential anti-carcinogenic effects: green tea and linseed.

Green tea and its role against cancer

Green tea is originally from Asia. Several of its medicinal properties were described over a millennium ago in the Book of Tea, written by the Zen master Eisais in 1191.

It was used for dissipating the harmful effects of alcohol, as a stimulant and to treat various conditions like beriberi; people also used it to alleviate indigestion, prevent fatigue and improve urinary and brain functions.

A lot of studies are currently dedicated to revealing the relationship between habitual consumption of green tea and lower incidence rates of cancer.

Although studies still are not conclusive, one study performed in Japan in 2006 showed that adults that consumed three or more cups of green tea a day for several years had a lower risk of death by cardiovascular diseases.

These are just a few of the benefits that habitually drinking green tea will provide, according to different scientific institutions:

Green tea contains certain chemical substances called catechins (a group of flavonoids) that seem to act on carcinogenic cells. They do this by inducing their death without affecting healthy cells, particularly epigallocatechin gallate (EGCG).

How to Regulate Blood Sugar with Ceylon Cinnamon

At any rate, there still need to be a lot more scientific studies to determine which types of cancer this tea acts upon and to specify how exactly it works. A few drawbacks to this Chinese custom is that some suggest that green tea contains fluoride, which may be harmful for the body.

It’s important, however, to point out that fluoride is stored in the body in the bones and teeth, making them stronger. It plays a part in the calcium absorption process and prevents the appearance of dental cavities, if consumed in low amounts.

We recommend drinking two cups of green tea a day, which is a normal and healthy amount. By doing this, you will notice the positive results on your health.

Linseed and its role against cancer

Humans have consumed linseed (or flax seed) for a long time, either in the form of infusions, powders (Gofio preparations) or oils. This is because it has healthy fats and it’s an important source of fiber.

The majority of these uses are not supported by science, although there are several signs that linseed is useful to:

Linseed contains molecules called lignans which compete with estrogen (feminine hormones) inside the human body, in certain chemical reactions. This may help slow down the growth progress of certain types of cancer.

Although consuming linseed is highly recommended, it’s important to get informed about its contraindications and interactions with other foods. Linseed could have side effects, like allergies, stomachaches, nausea and mild bleeding. If you’re pregnant or suffer from some type of chronic disease, always consult your physician.

Nature’s wonderful gifts for our health

We’ve talked about two excellent natural products in this article that may be a potential aid in the prevention and fight against cancer. We recommend using them in your daily diet, perhaps a few cups of tea and a little linseed will be exactly what your body needs to feel better.

Skin Cancer Warning Signs and What to Do About Them
While prevention is the key to preventing skin cancer, there are some skin cancer warning signs that can help you get an early diagnosis. Read on! Read more »

Link copied!
Interesting Articles
Naturopathy
What Is Colloidal Oatmeal and What Are Its Benefits?