We need to point out that these cells only attack and destroy leukemia cells, but they are not effective against those that create other types of cancer. 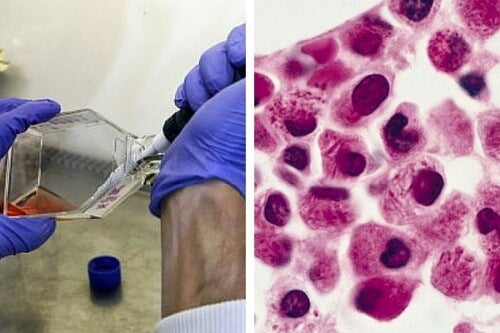 Leukemia is a type of blood cancer that starts in the bone marrow, tissue located in the middle of certain bones. The majority of blood cells are created in the bone marrow. While there are treatments to fight leukemia, it’s a difficult disease to cure and many patients relapse. However, scientists say they have found a way to make leukemia cells destroy themselves.

Leukemia starts when immature blood cells become cancerous. As a result, these cancer cells prevent the formation of sufficient amounts of red blood cells, platelets, and healthy white blood cells. This then sparks a series of lethal symptoms that increase as benign cells become lesser in number.

Cancer spreads through the bloodstream and lymph nodes. As it advances, it can even reach the brain, the spinal cord, and other parts of the body.

Scientific advances have lead to the development of different treatments to fight this disease. Unfortunately, it continues to be one of the most difficult to treat. Patients on the treatment generally experience constant relapses because oftentimes the cells become resistant to medication.

A new study published in the National Academy of Sciences, however, recently gave new hope. Researchers revealed that there is a great possibility that the malignant cells could destroy themselves.

Scientists at The Scripps Research Institute (TSRI) in La Jolla, California have developed a new treatment technique. Amazingly, they found a way to make leukemia cells transform into immune cells.

These immune cells would then destroy the cancer, which otherwise grows uncontrollably and complicates the disease.

The key to making this possible is a fairly rare type of human antibody. It activates receptors in marrow cells that cause these cells to mature and become useful.

Antibodies are a type of protein that is formed naturally by the human body’s immune system. They work in conjunction with white blood cells to fight possible external invaders, be it to neutralize or destroy them.

With this in mind, the researchers are trying to develop a therapy involving antibodies. This therapy would convert leukemia cells inside the bone marrow into non-cancerous cells.

The antibodies would be able to activate immature cells and make them healthy and useful for treating damaged cells.

After years of research, however, they never expected that antibodies could help cells to mature into very different varieties. For example, some turned into dendritic cells, which may increase the body’s immune response.

In order to understand such an important finding, the researchers added several antibodies to a human blood sample rich in dangerous leukemia cells.

As a result, they discovered that the antibodies could transform dangerous cells into other types of cells. Furthermore, these transformed cells actually supported the immune system.

After giving the cells even more time to work, they began to mature. Additionally, they started to resemble cells responsible for hunting down and destroying threats to the body, including viruses, bacteria and leukemia cells.

NK cells, also known as “Natural Killer” cells, were shown to have the ability to affect even cancerous cells. They were able to destroy up to 15% of the leukemia cells in a sample after just 1 day.

Even though this sounds unbelievable, these groups of cells only killed the leukemia cells. Unfortunately, the cells did not affect cells that create other types of cancers in the body.

A New Treatment for Leukemia Cells on the Horizon

Thanks to the study’s incredible results, researchers hope doctors can use this treatment to transform NK cells. Moreover, this treatment might have the possibility of completely curing patients.

Head researcher Richard A. Lerner said, “This is a completely new focus for cancer treatment and we are working to try it on human patients as soon as possible.”

He then added, “We’re discussing this with drug companies to bring it to humans after the appropriate preclinical toxicity studies.”

So to sum up, this is a very beneficial treatment. Furthermore, these antibodies could be useful with little or no further modifications.

It is believed to significantly reduce the probability of side effects related to current treatment programs since it’s more tolerable than chemotherapy.