There are many delicious tuna fillings that are full of nutrients. They're ideal complement to diets that are meant to help maintain or lose weight. 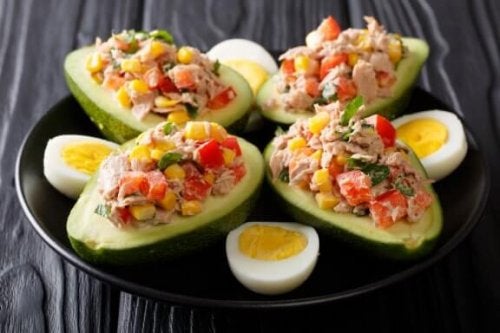 In general, we often turn to tuna fillings when we need a quick bite to eat that’s healthy and nutritious. Also, even though canned tuna is often used for this purpose, you can use the meat of this fish in other ways.

Tuna meat is quite valued due to its smooth flavor and texture that goes well with several ingredients. Of course, the consistency will vary depending on the type of preparation.

It’s best to choose fresh meat over canned meat because the nutritional value is different (especially when it comes to protein).

Some Facts About Tuna

Tuna is a saltwater predatory fish whose physical features allow it to travel at great speeds. They’re migratory animals that, due to the speed of their movements, develop a very particular fat and musculature. This makes their meat quite sought-after in markets. Therefore, they can be used in a good variety of culinary uses.

Unlike other fish, tuna are warm-blooded fish that can withstand temperatures of 8°C. Therefore, this fish can live in both temperate and tropical waters.

Now, what does tuna meat have to offer us?

Clearly, not only does it provide protein, but also many other nutrients, such as sodium, calcium, potassium, zinc, phosphorus, iron, folic acid, omega 3, and vitamins A, B, D, and E, as well as healthy fats.

Overall, it should be noted that tuna is very rich in nutritional value due to its diet that consists of crustaceans and other small-sized fish.

Read this article, too: 5 Signs That You’re Deficient in Omega-3 and Omega-6 Fatty Acids

Canned tuna is mostly used because the characteristics of this fish preserve well and it’s quick to use.

Certainly, tuna that’s sold in cans can come in compact pieces, chips or shredded. The latter consists in separating the meat in pieces (whose thickness can vary, but in general, it’s quite fine).

Pisillo is a Venezuelan dish that uses tuna as its main ingredient.

Check out this article, too: Omega 3: More Foods Than Just Oily Fish

Tuna fillings can vary greatly, so don’t worry too much about sticking to the same one.

However, eating excess amounts of tuna can be dangerous. Therefore, it’s best to consume tuna a maximum of times a week. In addition, it’s better to preferably eat it fresh. Canned tuna should be eaten only every once in a while.

Four Ways to Make Deviled Eggs with a Few Ingredients
Deviled eggs are delicious and nutricious snacks that are quick and easy-to-make. Take a look at these 4 deviled egg recipes. Read more »
Link copied!
Interesting Articles
Recipes
How to Make Raspberry Jam at Home

Endive pomegranate salad is a dish that you can routinely include in your diet. It provides essential micronutrients, as well…

Is there such a thing as a healthy, light, and flavorful cream cheese? Yes! There are many options, including labneh,…