Learn All about Chest Pain

Chest pain is pain located between the neck and abdomen. Its has various causes and may be cardiac or non-cardiac. In this article, we'll describe its characteristics. 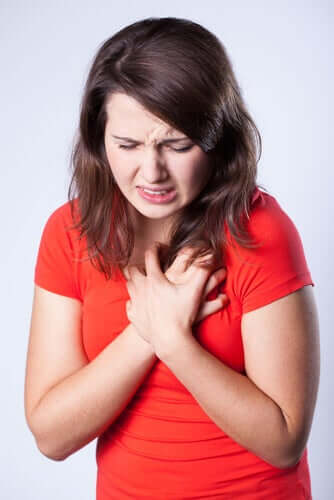 Chest pain can come from any structure that’s in the chest. It can originate from an organ such as the esophagus or the muscles, nerves, or ribs. In this regard, it may also spread, meaning that the pain can travel to the neck, upper limbs, or even to the face.

Many people fear this type of pain. This is because they unconsciously associate it with heart problems. Approximately 5% of emergency service consultations are attributed to chest pain. It’s less common in pediatrics, constituting less than 1% of emergency visits at that age.

In this article, we’ll take a closer look at what may cause this type of pain.

For pain to be considered chest pain, it should come from some area between the neck and the abdomen. Some may describe the feeling as pain, while others may simply consider it bothersome or tightness.

The two categories of chest pain

Experts usually divide this pain into two main groups: cardiac and non-cardiac. This allows doctors to quickly distinguish between the pain that requires urgent attention from the one that can be treated less urgently.

Below, we’ll list the cardiac causes of this pain. Then, we’ll also mention some groups of structures that may cause non-cardiac chest pain.

Keep reading: Everything You Need to Know About Treating Pneumonia

Non-cardiac pain: Pain that arises in the digestive tract

Keep discovering in this article: Chest Pains – Why Do They Happen

Other causes of pain in your chest

As we mentioned above, besides the organs of the chest and abdomen, other structures and situations can cause this pain. Thus, it’s always necessary for doctors to discard the most serious causes of this pain before trying to diagnose other causes that can be treated with less urgency.

As you can see, there are countless causes of this type of pain. Make sure to see your doctor if you have any questions.

Chest Pains – Why Do They Happen
At some point, you may have felt chest pains and they greatly concerned you. No wonder, after all, it's an organ of the utmost importance in our lives. Read more »
Link copied!
Interesting Articles
Illnesses
Causes, Treatments and Symptoms of Oliguria