Learn All about Swallowing Disorders

Swallowing disorders usually manifest with pain or difficulty swallowing. In this article, we'll explain more about them and how to detect them. 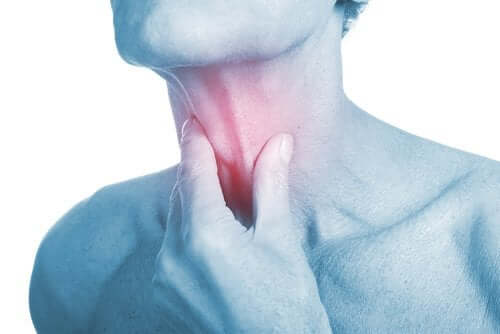 Swallowing disorders alter the passage of food from the mouth to the stomach. Overall, they include a set of various disorders. However, what they have in common is that they affect the swallowing process.

These disorders, in addition to having different origins, can also manifest with varied symptoms. Sometimes, it’s obvious there’s a swallowing problem (for example, being unable to swallow). However, other times, there are simply a series of complications from not being able to eat properly, and the person who suffers from it isn’t aware of their problem.

Unfortunately, swallowing disorders are quite common. They particularly affect older people and can even cause serious health problems, such as malnutrition or dehydration. In this article, we’ll explain everything you need to know about them.

Swallowing is a complex process that involves different muscles of the mouth and the pharynx, larynx, and esophagus. The goal is to move the food we eat from the mouth to the stomach to digest them. In addition to the muscles, different nerves that allow the coordination of movement of these muscles to participate as well.

Swallowing is divided into three phases: oral, pharyngeal, and esophageal. The oral phase consists of chewing food. This allows the body to form a bolus that passes into the pharynx. Once there, the second phase begins.

In the second phase, the pharyngeal phase, the coordination between the muscles we mentioned earlier is especially important. This is because it prevents food from passing into the larynx, as this can cause respiratory problems and even choking. Thus far, swallowing is a voluntary act.

Then comes the third phase. The action of the muscles causes the bolus to finally reach the esophagus, after preventing it to pass through the airway or return to the nose. Once in the esophageal phase, the bolus reaches the stomach thanks to peristalsis. This process consists of a series of involuntary muscle contractions and relaxations that make food go into the digestive tract.

As we mentioned above, swallowing disorders are a series of disorders whose only common feature is that they affect this process. In other words, they may have different origins and different symptoms.

However, most swallowing disorders cause dysphagia, which is difficulty swallowing. It causes the sensation of food not passing or that it’s stopping somewhere in the neck. It’s estimated that nearly 15% of people over 50 feel dysphagia. Also, it’s one of the main symptoms of a tumor in the esophagus or pharynx. Therefore, the doctor needs to examine this situation correctly.

Also, swallowing disorders may manifest with symptoms of nasal regurgitation or suction, such as coughing and choking. Sometimes, the food that was just ingested is immediately ejected.

Read on to learn more: Esophageal Achalasia: Symptoms and Treatment

Other symptoms of swallowing disorders

Another symptom that usually manifests with these conditions is painful swallowing. The medical term for this is odynophagia. It tends to manifest due to an injury in the pharynx or esophagus. This is common in certain infections.

However, it’s important to know that not all swallowing disorders manifest symptomatically. As we mentioned above, sometimes all that can be seen are the complications that result from alterations in this process. For example, respiratory complications are common, because the bolus enters the respiratory tract. This is associated with many infections, such as pneumonia.

Another situation where swallowing disorders don’t cause typical symptoms is when they affect Parkinson’s patients, who have particular digestive system problems, besides not being able to express their symptoms clearly. They tend to suffer from malnutrition and dehydration because of this.

You may also like this article: What to Do When Someone is Choking

Overall, it’s important to consult a doctor if you notice any type of problem that affects the swallowing process. This is because the causes of these disorders are diverse and it’s essential to establish a proper diagnosis.

Esophageal Achalasia: Symptoms and Treatment
Esophageal achalasia is a rare disorder in which a person can't swallow either solids or liquids. How is this disease diagnosed and treated? Learn more in this article. Read more »
Link copied!
Interesting Articles
Illnesses
Everything You Should Know about Hypochondriasis