Learn All About Gluten Intolerance 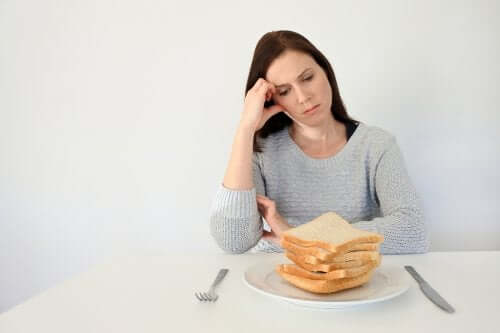 Celiac disease and gluten intolerance are related. However, they’re also very different. Although the root cause of the problem is gluten, there are nuances. In this article, learn all about gluten intolerance.

The immune system of people who suffer from celiac disease reacts aggressively when gluten, a protein present in cereals, circulates through their digestive tract. Therefore, celiac patients must strictly follow a gluten-free diet for life. Meanwhile, although gluten sensitivity isn’t an autoimmune reaction, those who suffer from it notice an improvement when they restrict this protein from their diet.

Gluten is a glycoprotein found in popular cereals such as wheat, barley, rye, or oats. It’s also present in other cereals that people consume less frequently, such as spelt (also called dinkel wheat) and triticale (a hybrid of wheat and rye). According to a review published in the journal Nutrients, it’s a nutrient that can negatively interact with some people’s digestive system.

All about gluten intolerance

Many more people suffer from gluten sensitivity than celiac disease. Is it possible for your body to react to gluten if you don’t suffer from celiac disease? Indeed, many people say that they feel much better when they don’t consume gluten, even if they don’t follow a strict diet.

Although their duodenal villi are usually normal, eating foods with gluten makes them sick and causes:

Patients with gluten intolerance feel bad when they consume gluten. However, this glycoprotein doesn’t damage their digestive tract. Celiac sufferers may or may not have discomfort. Nevertheless, gluten progressively deteriorates their intestines. Thus, they have no other option but to follow a strict gluten-free diet for life. This is why regular checkups are important.

This article may interest you: All About Celiac Disease or Gluten Intolerance

In the specific case of gluten sensitivity or intolerance, and given that experts haven’t yet identified a specific biological marker of this disorder, the treatment would help to confirm this diagnosis. It consists of elimination diets with the subsequent reintroduction of foods, observing the clinical changes that occur in both periods.

The use of probiotics is a promising therapy against celiac disease, especially to prevent it. Based on current scientific articles, some experts state that these bacteria may also be able to improve the symptoms associated with gluten intolerance.

Gluten-containing foods that should be avoided

To control gluten sensitivity and its symptoms, you need to avoid foods that contain it in large quantities.

Here are the foods a person with gluten problems should avoid:

To avoid deficiencies, you must substitute the aforementioned cereals for other gluten-free ones with a similar carbohydrate contribution:

Read on to learn more: Is it Right to Include Gluten-Free Products in Your Diet?

You shouldn’t follow a gluten-free diet to lose weight

You must restrict gluten if you suffer from gluten sensitivity

Although gluten intolerant patients can consume foods with this glycoprotein, they may suffer digestive discomfort afterward. For this reason, experts often advise these patients to avoid gluten as much as possible, opting for foods labeled gluten-free.

The Eight Best Types of Gluten-Free Pasta
Do you know the best gluten-free pasta you can find on the market or even make at home? Discover them in this interesting article! Read more »
Link copied!
Interesting Articles
Nutrition
What is Food Safety?