LATE dementia is a disease that’s very similar to Alzheimer's disease. How does it develop? Who does it affect? In this article, we tell you all about it! 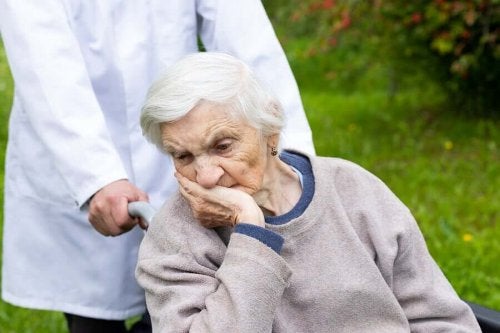 Between 15 and 20% of people diagnosed with Alzheimer’s disease actually suffer from LATE dementia. It’s a type of dementia that, until now, had been misdiagnosed as Alzheimer’s disease, as its clinical manifestations are similar. Experts expect that its incidence will increase in the coming years.

This disorder mainly affects the elderly. Just like Alzheimer’s, LATE dementia causes memory loss and the inability to perform everyday activities. In this article, we’ll share their differences and most important characteristics.

LATE dementia is a proteinopathy, which means that it’s caused by the alteration of certain proteins. It causes a dementia that’s very similar to the one Alzheimer’s disease causes.

LATE stands for limbic-predominant age-related TDP-43 encephalopathy. One of the differences between it and Alzheimer’s is that the altered brain protein is TDP-43. In the case of Alzheimer’s, the proteins TAU and beta-amyloid don’t function properly.

An excess of altered proteins produces neurotoxicity and neurodegeneration. 25% of people over 85 suffer from sufficient alterations of this protein to cause symptoms.

This article may interest you: The Differences between Dementia and Alzheimer’s

Who does this disease affect?

Another difference worth mentioning is that the likelihood of suffering from Alzheimer’s doesn’t indefinitely increase with age. However, the risk of LATE dementia does, especially after the age of 80.

The acronym LATE was chosen because it also served to define this characteristic of the pathology. Women are at an increased risk of developing this disease because, nowadays, their life expectancy is higher than that of men.

How is LATE dementia diagnosed?

In recent times, due to the advance of diagnostic techniques, the TDP-43 protein has been identified more precisely. Currently, the most precise techniques for diagnosing Alzheimer’s disease are based on the study of biomarkers in the cerebrospinal fluid.

Such markers are the proteins TAU and beta-amyloid, which we mentioned above. Another diagnostic technique is finding accumulations of these proteins in the brain by using imaging techniques, such as PET scans.

However, most of the time, the diagnosis of Alzheimer’s is based on the symptoms and clinical picture. Doctors rarely request these biochemical tests to confirm the disease. That’s why some of the people who are diagnosed with Alzheimer’s actually suffer from LATE dementia.

In the case of LATE dementia, the goal is to apply the same techniques as in the case of Alzheimer’s disease but to look for the TDP-43 protein instead. The presence of a sufficient amount of this protein in its altered form confirms the diagnosis.

The symptoms of this disease

LATE produces symptoms that progress more slowly than in other types of dementias. Recent studies suggest that the disease progresses in three stages.

You may like this article: Memory Loss and Forgetfulness: Are They Normal?

At present, the discovery of this new disease won’t lead to changes in the diagnosis and treatment of the dementias known so far. However, it has opened new research areas.

Knowing the etiology of these diseases more accurately can lead to the future development of specific treatments for each.

Currently, there’s no effective treatment for such diseases. This will become increasingly important because, as we discussed in previous sections, experts expect that the incidence of this disease will increase in the coming years.

What’s Vascular Dementia?
If you suffer from vascular dementia, your symptoms will worsen progressively, rather than gradually as it happens to Alzheimer's patients. Read more »
Link copied!
Interesting Articles
Illnesses
Can Celiac Disease Cause Infertility?