Even though we don't consider it one of the most dangerous health habits, excessive stress can cause recurring health problems. These include headaches, anxiety and even depression. 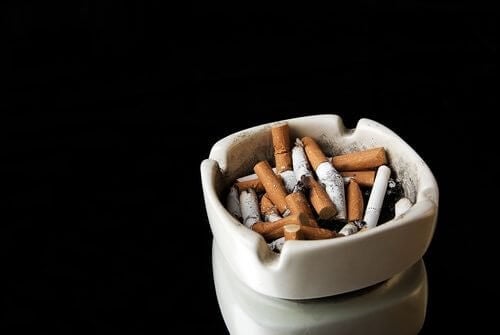 Human beings’ lives are made up of various habits. Unfortunately, many of these habits can become toxic for the people who practice them. While it’s difficult to live a perfect life, there are different ways to stay healthy.  In this article, we’ll talk about the 5 most dangerous health habits.

Toxic Habits in the 21st Century

Habits depend on the environment where they’re developed in life. Our practices gradually change depending on our culture, beliefs, work, as well as other personal and social factors.

A very clear example is one we see presently: technology.

Starting as infants, we are immersed in technology. This does promote some development on a mental level.  However, it also contributes to being sedentary and other practices that aren’t healthy at all.

We should note that a “technological infancy” dominates today since it’s much easier to find these devices.

The 5 Most Dangerous Health Habits

A habit is an action that is regularly practiced and whose repetition makes it become usual.

However, doing it on a constant basis doesn’t necessarily mean that it’s a good thing.

Let’s take a look at some of the most dangerous health habits that we should try to avoid.

Despite being considered one of the main causes of death for inactive people, many don’t think being sedentary is among the most dangerous health habits.

Most people usually confuse extreme quiet with rest. This is a common and dangerous mistake.

It’s common to experiences periods of stress. These reactions are something that happens to all human beings. However, we do need to learn how to cope with them.

The problem starts to appear when it becomes excessive. That’s when it turns into one of the most dangerous health habits.

Stress should be regulated. Even though it’s the result of several physiological reactions, it shouldn’t become a habit.

Gradually, its excess can cause:

More information in this article: Understand the Negative Effects of Stress

This is another one of the most dangerous health habits. The worst part is that many people don’t realize the importance of this meal.

A lot of people skip breakfast to lose weight. However, doing this actually causes the opposite.

Others, for instance, say that they don’t have time. They claim that the pace of their life doesn’t allow them any time to cook something in the morning.

For one reason or another, not eating breakfast is one of the most harmful habits human beings practice.

The lack of nutrients caused by the nightly fast and not eating food in the morning influences your cognitive response.

Thus, the decrease in attention and the inability to complete academic activities increase considerably.

Human beings are social creatures. As a result, they depend on interaction with other people to live. This can be for work or for pleasure.

However, spending time by yourself is very healthy (getting to know and reflect on yourself). Despite this, when solitude is the common denominator, something isn’t right.

Spending too much time alone brings few good things. As a result, the best thing is to manage yourself and have friends.

When solitude becomes a habit, your psychological state is the most affected part of you. In the long run, diseases like nervousness, anxiety and depression can appear.

You can also read: Do You Know the Side Effects of Loneliness?

The sun isn’t as friendly as you think. Getting a tan isn’t as healthy as it appears. It’s good to focus on aesthetics as long as you do so with protection.

When you avoid sunscreen, your skin is the first organ to suffer the consequences. These include things like reddening and burns. With time, you will also develop more freckles, wrinkles and age spots.

At the same time, you can’t forget that there are other parts of the body that can also be affected by this bad habit. For instance, the sun can damage your eyes.

9 Consequences of Not Wearing Sunglasses
The effects of UV radiation can be harmful to your vision whether you see the sun or not. Learn why using sunglasses is always important here. Read more »
Link copied!
Interesting Articles
Did you know?
New Year's Traditions Around the World

Interesting Articles
Health
Foot Warts in Children: How to Remove Them