What You Need to Know About Fibromyalgia

Fibromyalgia is a chronic condition that can reduce the patient's quality of life. Discover with us what you need to know in order to fight it. 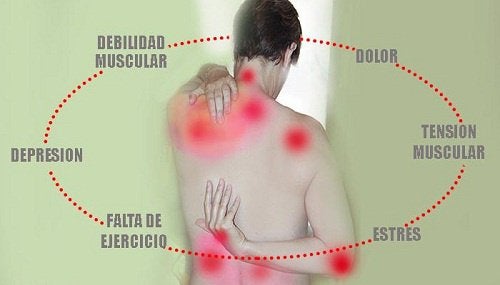 Fibromyalgia is a condition that’s more common than we think, however, many people are unaware that they even have it. Its evasiveness lends it the nickname “invisible illness” since it doesn’t show up in X-rays nor in blood tests.

Patients with this condition aren’t able to test satisfactorily. When they sleep, their bodies experience excessive sweating (hyperhidrosis). Further, in many cases, its symptoms can become more serious.

Fibromyalgia is a chronic rheumatic condition, characterized by generalized pain and constant exhaustion, as well as other varying symptoms.

Patients don’t show any visible change despite suffering from many symptoms. This is because there’s chronic pain in different parts of the body.

In addition to fatigue, another important aspect about fibromyalgia is that it results in muscle contractions, herniated discs and rheumatic problems. This can ultimately lead to immobility.

Nobody knows the exact cause of fibromyalgia, but some people believe that it results from an irregularity in the central nervous system.

There’s a hypothesis that suggests that this condition occurs when the intestine walls swell and become hyperpermeable. It’s common in people that have a thinner-than-normal intestine wall. Hence that allows things other than nutrients, such as waste and toxic substances, to pass the intestine wall.

Everything that passes eventually reaches the liver and kidneys, which kicks the immune system into action. The immune system marks them as enemies and begins to attack the elements. Considering this hypothesis, it’s extremely important to eat a healthy diet.

Another possible cause of fibromyalgia has to do with a neurotransmitter imbalance. Imbalances might cause different symptoms in this condition.

For example, generalized pain could result from an alteration in the pain modulation pathways. However, there isn’t enough scientific evidence that confirms this hypothesis.

8 Signs that Something Is Wrong with Your Intestines

Fibromyalgia isn’t the same for every patient. There are different types of this condition. Therefore, treatment focuses on relieving the symptoms that each patient experiences particularly.

Classifications of different types of fibromyalgia:

Night sweats: one of the symptoms of fibromyalgia

Despite it might seem impossible to combat the night sweats, it’s possible. How? It’s easy. You only need to follow a balanced diet and, of course, be extra careful about the foods you eat at dinnertime.

Another idea is to take a shower with warm water before going to bed. In addition, rub on a thin layer of essential eucalyptus oil onto certain areas of your body. It’ll help you hold on to a feeling of being refreshed.

Further below, we’ll explain more ways that all fibromyalgia patients should put into practice in order to enjoy a higher quality of life.

Take care of your diet

Another thing you must know about Fibromyalgia is that you really need to take special care of what you eat. You’re better off avoiding dairy products, sugar, gluten, red meat, potatoes, tomatoes, eggplants, and bell peppers. As for fruit, you should opt for purees for the sake of your intestinal health.

Aim to avoid caffeinated drinks: for instance, coffee, mate and sugary drinks. In addition, you should also steer clear from foods that contain high amounts of vitamin C, like citric fruits. Being that those products can make it harder for you to fall asleep.

Another important aspect about Fibromyalgia is that exercising can be great therapy. Medical experts recommend doing aerobic exercise consistently.

If you’re in too much pain, you can always look up a physical therapist and look into a rehabilitation treatment that can help you with the pain. Give it a try! There’s a wide variety of options available. Professional physical therapists know all about fibromyalgia and will know what you need according to the pain.

Follow the doctor’s instructions, eat healthy, and exercise. By doing so, you’ll be able to handle this condition much better.

6 Ways to Control Stress and Anxiety without Drugs
Stress affects each of us physically and emotionally. And, we all carry our stress in different ways. But, before you reach for a prescription, there are many natural methods you can follow to control stress. Finally, gain control of your anxiety and lower your stress levels with these lifestyle tips. Read more »
Link copied!
Interesting Articles
Illnesses
Everything You Should Know about Hypochondriasis