Kawasaki disease is a rare condition that affects children. It causes inflammation in the blood vessels and fever, sometimes seeming like another disease. Read this article to find out everything you need to know about this disease. 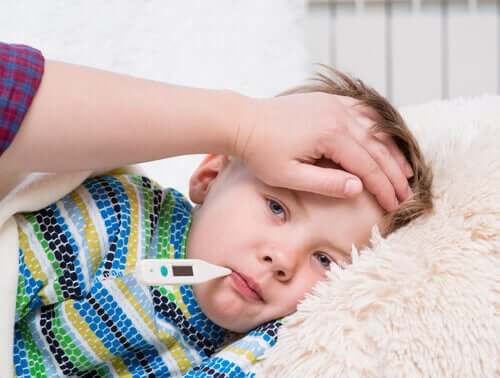 Kawasaki disease is a rare disorder in children. Its incidence isn’t very high, but it’s important that doctors know of its existence to detect it if it occurs in their young patients.

The key point of the condition is the inflammation of the blood vessels. It doesn’t distinguish between veins and arteries, either one can be affected.

It’s also able to inflame lymph nodes and mucous membranes in the face, such as those in the nose and mouth. For this reason, Kawasaki disease can also be called mucocutaneous lymph node syndrome in some cases.

In general, children under 5 years old are affected. It’s more frequent among boys than girls, but the difference in prevalence is minimal. Some ethnic groups have more frequency of the disorder than other regions of the world, such as Japanese people.

The cause and origin aren’t clear. Some hypotheses mention the intervention of microorganisms as triggers for symptoms, but researchers haven’t proven this claim. Some doctors also suspect there could be a family genetic predisposition, although they haven’t figured out exactly how it works.

How do you diagnose it?

World medical associations have developed a criteria guide for diagnosing Kawasaki disease. There should always be a fever and, in addition, four of the following symptoms:

Along with the observation of symptoms, the doctor must rule out other conditions that could be confused with Kawasaki disease. If you have reasonable suspicions, you should request an echocardiogram, which will detect inflammation of the blood vessels.

Find out more: 7 Heart Murmur Symptoms You Should Know!

The treatment for patients with Kawasaki disease is based on gamma globulins, aspirin, and anticoagulants. The intention is to stop the formation of aneurysms due to inflammation of the blood vessels.

Gamma globulins are inserted intravenously and are a key tool in stopping complications arising from the disease. In fact, doctors have noted that its greatest benefit is in preventing changes in the coronary arteries.

As for aspirin, doctors use it as an anti-inflammatory. Luckily, it also reduces fever and is a pain reliever, which would help with other symptoms, such as fever and joint pain. Aspirin is known to have certain adverse effects in children, so we recommend closely monitoring patients under this treatment.

About 10% of affected children will have continuing issues after recovery, mainly in the coronary arteries. They can even appear in 10% of patients treated on time, so we recommend subsequent follow-up with complementary methods.

A rare but treatable disease

Unlike other conditions, Kawasaki disease has a treatment plan and approach. Success depends a lot on accurate and early diagnosis. In Asian countries, doctors are more alert for detection, but cases have been reported worldwide. When the conditions we described are met, you may have a case of Kawasaki disease.