Is Red Meat Bad for Our Health?

Consuming red meat isn't harmful to health when it's consumed in moderation. However, processed meats or poorly cooked meats can pose a health risk. 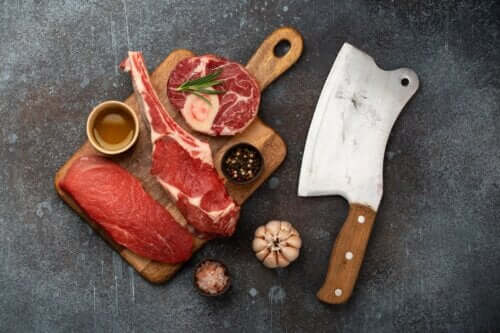 A few years ago, an article came to light that linked consuming red meat with an increase in the probability of premature death. However, the results of this study have been misrepresented in the press and many conclusions have been erroneous on behalf of some journalists.

The article in question linked the consumption of processed red meat to increased cardiovascular risk and cancer risk. However, these diseases weren’t related to the red meat itself, but the industrial processing of red meat.

In the industry, a large number of additives are added to the meat. These additives can put our health at risk in the medium to long term. However, the press extended this risk to consuming red meat in general.

From this moment on, the public has demonized red meat, favoring restrictive and vegan diets. Also, consuming animal meat was recommended on a very occasional basis, no more than once every two weeks.

Red meat is necessary (in moderation)

The human being, as an omnivorous animal, needs a varied diet. Red meat should be part of the diet, although in moderate quantities, as experts have proven.

On the one hand, it provides a good quantity of proteins of high biological value, which present all the essential amino acids and have an adequate digestibility. Also, it’s a food that’s rich in highly bioavailable iron and is a source of B vitamins.

Red meat, under a suitable culinary process (grill, oven), should appear at least once in our weekly diet.

However, according to a study published in the journal Food and Chemical Toxicology, consumption of processed meat foods should be avoided. Cold cuts, especially fatty ones, contain a large number of additives, nitrates, and other substances necessary for their preservation. These substances can be harmful to health when ingested regularly.

We should consume these processed foods sporadically, no more than once every 2 or 3 weeks. A balanced and healthy diet should prioritize the intake of fresh products.

Discover: Turkey and Chicken Meat: What Are the Differences?

One of the problems with vegan diets is the increased likelihood of anemia. There’s low availability of iron present in vegetables.

In addition to this problem, we have to consider the probable lack of vitamin B12, in the absence of supplementation. The result of this cocktail is possible anemia in the medium term.

Anemia is a disease that develops slowly, so its symptoms often remain latent for a long period of time.

However, the consumption of meat prevents very efficiently the development of this disease. In fact, red meat is the one with the highest amount of highly bioavailable iron. Therefore, consuming red meat at least once a week would be sufficient to correct the deficiencies of these micronutrients.

Another problem with consuming red meat is the cooking method to which it’s subjected. On many occasions, people fry it which increases the production of acrylamide and, with it, the health risk.

Other times, it’s smoked or grilled, both of which are risky cooking methods for the development of diseases in the medium term.

However, if we cook it on the grill (as long as we don’t burn it), in the oven, or stews, it isn’t really dangerous for our health. It’s interesting to consume red meat undercooked rather than overcooked meat, especially when we prepare it on the grill. In these situations, it’s essential to guarantee the quality of the meat and its wholesomeness, to prevent possible food poisoning.

You may be interested in: How to Make Quinoa and Garbanzo Meatballs

Consume red meat, but in moderation

Consuming red meat isn’t harmful to our health; on the contrary, it’s necessary in small amounts.

However, consuming industrially processed meat can be dangerous, as well as an incorrect preparation of meat through inadequate cooking methods. For this reason, it’s completely safe to include this type of food in the diet.

Nevertheless, we have to try to make our diet as varied as possible and balanced from an energetic point of view. This way, we can help to improve our health and prevent diseases in the medium and long term.

Parmesan Veal Steaks, an Easy Recipe
Beef and veal are one of the meats with the highest amount of protein and minerals. In addition, this parmesan veal recipe has even more nutrients thanks to its additional ingredients. Read more »
Link copied!
Interesting Articles
Nutrition
Nutritional Information and Health Benefits of Peas