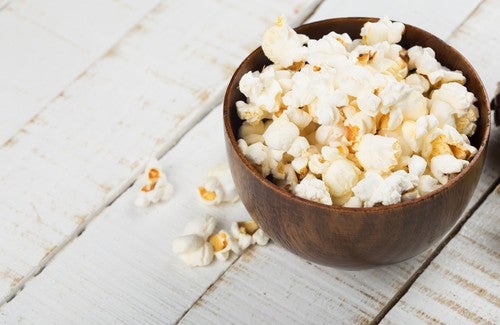 There are a lot of us popcorn-eaters out there. When we go to the theater or watch a movie at home, we frequently eat those delicious kernels. But, what is in popcorn? Is popcorn healthy? In this article we will discover the dark side of popcorn.

Corn, in its organic state, is a grain with a high fiber content and is a good source of folic acid, vitamin C, and niacin (vitamin B3).  Just-popped popcorn made with organic corn kernels have been very popular for several generations as a delicious and natural healthy snack.  However, the variety for commercial microwaves is fundamentally different, neither natural, nor healthy.  They come with a cocktail of toxins involved in several health problems, including Alheimer’s disease, pulmonary lung disease, and chronic kidney disease, just to name a few.

The comfort, ease of preparation, and intoxicating aroma are three reasons for making popcorn in the microwave, but here are three big reason why you shouldn’t.

Butter flavoring is bad for health

The butter flavoring used in microwave popcorn could cause diseases.  Diacetyl is a chemical product used in microwave popcorn that gives the product its taste and smell.  A study published on August 1st, 2012 in the magazine ACS of Chemical Studies in Toxicology, showed that diacetyl increased the levels of beta-amyloid proteins in the brain.  This grouping is an indicator of Alzheimer’s disease.  Diacetyl also harms nerve cells.  This study warned of the serious neurological toxicity that overexposure to this chemical can cause.  Even products that try to avoid using Diacetyl, use similar artificial butter aromas that are unfortunately other forms of diacetyl.

Perfluorooctanoic acid is a synthetic chemical substance applied to the lining of microwave popcorn bags.  Its application prevents any interaction with liquids or fats, creating a non-stick surface in the lining of bags.  It is carcinogenic and toxic for animals and humans, and remains in the environment in an undefined form.  Raised cholesterol, chronic kidney problems, and respiratory problems like asthma, and pulmonary disease are a few of the health problems associated with perfluorooctanoic acid.

For those that eat microwave popcorn, studies show that 20% of the perfluorooctanoic acid in the blood comes from popcorn consumed.  80% of these toxic gasses are emitted the moment you open the bag, and from then on continue to diminish, although they are always present after opening.

The majority of microwave popcorn is made with some sort of altered oil, typically coconut or soy oils, converted into trans fats that obstruct the arteries and cause heart diseases and body inflammation.  FDA labeling guidelines allow producers to round any trans fat value to zero that is found in less than 0.5 grams per portion in the container.  They could even clearly state “no trans fat”, when there could still be a maximum of half a gram per portion.

What is the alternative?

The natural alternative to microwave popcorn, of course, is popcorn made at home, which is surprisingly easy to make, without the dangers that its packaged opposing party, and with all of corn’s benefits.  The recipe is as follows:

-Heat 2 Tbsp. of oil or butter in a large pan, over medium heat.

-Mix all in oil and cover.

-The corn will begin to pop in less than one minute.  Once the popping sound stops, it is done.  Sprinkle with sea salt and/or any other natural flavoring, like fresh black pepper or a mix of spices.